Just last year, it seemed there was something to celebrate despite planet Earth’s ongoing honeybee apocalypse: Bee colony losses were down. Not by enough, but they were down.

“It’s better news than it could have been,” said Dennis vanEngelsdorp, a University of Maryland entomology professor who led a survey of bee populations that reported a loss of 23 percent of bee colonies — less than 30 percent, the average from 2005 to 2013. “It’s not good news.”

Though scientists cited progress in battles against an Asian mite that has killed many an American bee, they had words of caution.

“One year does not make a trend,” Jeff Pettis, a co-author of the survey who heads the federal government’s bee research laboratory in Beltsville, Md., told the New York Times.

Turns out Pettis was right. VanEngelsdorp and other researchers at the Bee Informed Partnership, affiliated with the Department of Agriculture, just announced more than 40 percent of honeybee hives died this past year, as the Associated Press reported. The number is preliminary, but is the second-highest annual loss recorded to date.

“What we’re seeing with this bee problem is just a loud signal that there’s some bad things happening with our agro-ecosystems,” study co-author Keith Delaplane of the University of Georgia told the AP. “We just happen to notice it with the honeybee because they are so easy to count.” 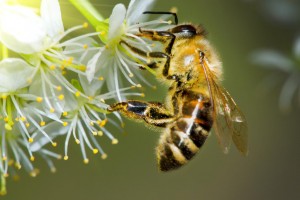 Honeybees at an Eau Claire, Mich., orchard last year. Beekeeper Jim Baerwald, owner of His Bee Farms in Eau Claire, said he has seen losses in the number of bees. (Don Campbell/The Herald-Palladium/AP)

The cause of the bees’ demise was not noted, but researchers said colony collapse disorder — which causes mass deaths of the bees for reasons not fully understood — was not necessarily the culprit. As the Times put it last year: “What has emerged is a complex set of pressures on managed and wild bee populations that includes disease, a parasite known as the varroa mite, pesticides, extreme weather and poor nutrition tied to a loss of forage plants.”

“The winter loss numbers are more hopeful especially combined with the fact that we have not seen much sign of Colony Collapse Disorder (CCD) for several years, but such high colony losses in the summer and year-round remain very troubling,” Pettis said in a statement. He likened summer deaths to having “a higher rate of flu deaths in the summer than winter.”

“If beekeepers are going to meet the growing demand for pollination services, researchers need to find better answers to the host of stresses that lead to both winter and summer colony losses,” he said.

VanEngelsdorp called the situation “unheard of.”

“We traditionally thought of winter losses as a more important indicator of health, because surviving the cold winter months is a crucial test for any bee colony,” vanEngelsdorp said. “But we now know that summer loss rates are significant too. This is especially so for commercial beekeepers, who are now losing more colonies in the summertime compared to the winter.”

The state worst affected was Oklahoma, which lost more than 60 percent of its hives. Hawaii escaped relatively unscathed, losing less than 14 percent.

“Most of the major commercial beekeepers get a dark panicked look in their eyes when they discuss these losses and what it means to their businesses,” said Pennsylvania State University entomology professor Diana Cox-Foster, who didn’t participate in the survey. Her state lost more than 60 percent of its colonies.

The USDA estimated that honeybees add more than $15 billion to the value of the country’s crops per year.

“If losses continue at the 33 percent level, it could threaten the economic viability of the bee pollination industry,” the department said. “Honey bees would not disappear entirely, but the cost of honey bee pollination services would rise, and those increased costs would ultimately be passed on to consumers through higher food costs. Now is the time for research into the cause and treatment of CCD before CCD becomes an agricultural crisis.”

The survey included almost 400,000 colonies — more than 15 percent of the nation’s total. A researcher at Bayer, who makes pesticides linked to colony collapse disorder, said the losses were “not unusual.” Indeed, though losses are up, so were the total number of bee colonies.

But since beekeepers split surviving hives to repopulate, stressing bees out, VanEngelsdorp said an increasing number of hives “doesn’t mean bee health is improving or stable,” as the AP put it.