Horror at Sea; Smugglers ‘Locked’ Hundreds of Migrants in Hold of Capsized Boat in the Mediterranean; 700 Feared Dead

LIBYA/ITALY (ANS) – First it was the shocking news that 15 Muslim migrants had been arrested by Italian police after they allegedly threw 12 Christian fellow-passengers overboard, killing them simply because they were Christians.  The Christian migrants, from Ghana and Nigeria, were travelling in an inflatable boat from Libya to Italy, when the shocking incident is said to have taken place.

The boat was intercepted by an Italian navy vessel, which transferred the passengers to a Panamanian-flagged ship. That ship docked in Palermo on Wednesday (April 15) after which the arrests were made.  The police revealed that they learned of the killing when they began interviewing tearful survivors who had arrived in Palermo Wednesday morning after being rescued at sea.

But if that wasn’t enough, now comes news on Sunday, April 19, of another appalling incident in which smugglers were said to have locked hundreds of migrants in the hold of a capsized boat crammed with people which sank some 60 miles off the Libyan coast, and 120 miles south of the Italian island of Lampedusa.  It is said to have caused what could be the deadliest ever known migrant tragedy of mainly Africans trying to flee to Europe, and a new life.

According to media reports, Italian prosecutors said a Bangladeshi survivor flown to Sicily for treatment told them that 950 people were aboard, including hundreds who had been locked in the hold by smugglers. Earlier, authorities said a survivor told them 700 migrants were on board.  Eighteen ships had joined the rescue effort, but only 28 survivors and 24 bodies were pulled from the water by nightfall.

Prosecutor Giovanni Salvi told The Associated Press by phone from the city of Catania that a survivor from Bangladesh described the situation on the fishing boat to prosecutors who interviewed him in a hospital. The man said about 300 people were in the hold when the fishing boat overturned, and that about 200 women and dozens of children also were on board. 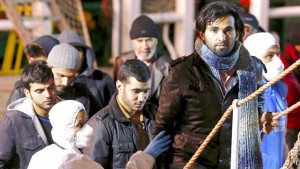 Migrants arrive on a boat at the Sicilian harbor of Pozzallo.

Salvi stressed that there was no confirmation yet of the man’s account and that the investigation was ongoing. The sea off Libya runs as deep as three miles or more and is said to be too deep for divers, suggesting that the final toll may never be known. So far this year, 35,000 asylum seekers and migrants have reached Europe and more than 900 are known to have died trying.

Meanwhile Sunday, rescuers were “checking who is alive and who is dead” in an area littered with debris and oil from the capsized ship. Maltese Prime Minister Joseph Muscat, whose island nation joined the effort, said only 50 survived, and called it the “biggest human tragedy of the last few years.”

Some reports say that the 66-foot vessel may have overturned because migrants rushed to one side of the craft late Saturday night when they saw an approaching Portuguese-flagged container ship, the King Jacob, which was sent to the area by Italy’s Coast Guard. The ship’s crew “immediately deployed rescue boats, gangway, nets and life rings,” a spokesman for its owner said.

Asked whether migrants rushed to one side as the Portuguese vessel pulled close, Iraso told Sky TG24 TV that “the dynamics aren’t clear. But this is not the first time that has happened.”

What is clear is that a major rescue operation is under way in the Mediterranean after as many as 700 migrants are feared to have drowned just outside Libyan waters, in what could prove to be the worst disaster yet involving migrants being smuggled to Europe.

The UN’s refugee agency, UNHCR, told The Guardian newspaper that up to 700 may remain in the water, according to numbers supplied by a survivor. The accident happened after the migrants saw a merchant ship in the distance and scrambled to attract its attention, over-balancing the fishing boat in which they were travelling.

Barbara Molinario, a spokeswoman for UNHCR in Rome, said: “They wanted to be rescued. They saw another ship. They were trying to make themselves known to it.”

If confirmed, Sunday morning’s accident means that at least 1,500 migrants have died so far in 2015 while on route to Europe – at least 30 times higher than last year’s equivalent figure, which was itself a record. It comes just days after 400 others drowned last week in a similar incident.

The deaths prompted fresh calls for Europe to reinstate full-scale search-and-rescue operations in the Mediterranean. Last October, the EU opted not to replace the Italian-run operation Mare Nostrum, which saved about 100,000 lives last year, amid fears that it was encouraging smugglers and migrants to organize more trips to Europe.