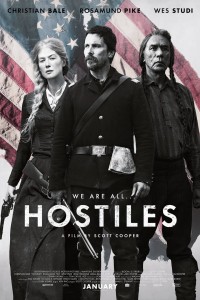 SANTA, FE NEW MEXICO (ANS) – In 1892, legendary Army Capt. Joseph Blocker reluctantly agrees to escort a dying Cheyenne war chief and his family back to their tribal land. Embarking on a harrowing and perilous journey from Fort Berringer, N.M., to the grasslands of Montana, they soon encounter a young widow whose family was killed on the plains. The travelers must now band together to survive a punishing landscape that’s crawling with hostile Comanches and vicious outliers.

Hostiles consultant Dr. Jolely Proudfit said it best: the new film — staring Christian Bale, Wes Studi, and Rosamund Pike — is a “brutally beautiful movie.” Beautiful in that the cinematography and themes of transformation, friendship, and human longing is cast in epic scenery of sublime splendor; brutal in that it shows humanity at its worst: prejudiced, violent, and depraved. I’d summarize Hostiles as one of the best philosophical — dare I say, theological — western-themed movies ever made.

The movie begins with a quote from British author and former New Mexico resident, D.H Lawrence: “The essential American soul is hard, isolate, stoic, and a killer. It has never yet melted.” And over two hours, Hostiles shows how Lawrence’s quote takes shape, delivering a mythic tale of despair and transformation within an American context. Hostiles’ story arch falls within the genre of journey narrative, telling a tale of humanity on a sojourn of discovery, fighting against self, foe, and friends.

Hostiles follows a battered military captain Joseph Blocker (played by Christian Bale in an award-winning performance) as he is forced to escort a rival, dying Cheyenne chief (Yellow Hawk played by Wes Studi) and his family from New Mexico to their homeland in Montana. Blocker takes some friends on the journey, Corporal Henry Woodsen (played by Jonathan Majors), and other appointed military men. Along the way Blocker picks up a widow (Rosamund Pike), criminals (Ben Foster), and extra military men to keep the escort moving towards its final destination. During the sojourn the group meets a band of wayward Comanche’s, soiled military men, and hostile white landowners.

Throughout the movie I was struck by the various ethical and theological themes manifest in the movie. As an example of the ethical: vocation, friendship, land ownership, human rights, conflict, family structures, and violence. And the theological: faith, evil, and God’s providence are all touched upon. With quotes as “If I did not have faith, what would I have,” “God is blind,” and the “Lord’s rough ways,” signal probing religious motifs within the film — not to mention the backdrop of Bible reading and Gospel singing.

To a certain extent the movie had a touch of New Mexico resident and Pulitzer Prize winning author, Cormac McCarthy, in it: violence, philosophy, and theology wrapped in engaging dialogue of brutal wonderment. And when you juxtaposition the two books highlighted in Hostiles, Julius Ceaser and the Bible, the audience is up for journey of mind, body, and soul. And though I won’t spoil the ending, the film leads one to ask: why give one book over the other?

Filmed in New Mexico and Colorado — the scenery was magnificent, acting as a character in the movie. There’s several travel scenes — humans and horses traveling across beautiful landscape — positioning the geography in a broader perspective within the human predicament, placing humanity in its proper context as participants in the drama of nature.

And though I think Hostiles is primarily a white man’s movie — telling the story of Blocker, it did provide insight into the world of a particular Native American family, showing strength, bonding, and love, with the Cheyenne family acting as a contrast to the wayward band of Comanche’s led by actor David Midthunder. And though the dialogue was sparse for the Native American actors, the facial expressions, body movements, and eyes spoke volumes.

Hostiles is rated R for strong language and violence.