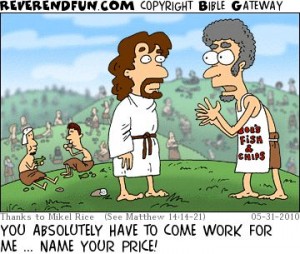 The new pastor decided to visit the children’s Sunday school.  The teacher introduced him and said, “Pastor, this morning we’re studying Joshua.” “That’s wonderful,” said the new pastor, “let’s see what you’re learning.  Who tore down the walls of Jericho?”  Little Billy shyly raised his hand and offered, “Pastor, I didn’t do it.” Taken aback, the pastor asked, “Come on, now, who tore down the walls of Jericho?” The teacher, interrupting, said, “Pastor, Billy’s a good boy.  If he says he didn’t do it, I believe he didn’t do it.” Flustered, the pastor went to the Sunday school director and related the story to him. The director, looking worried, explained, “Well, sir, we’ve had some problems with Billy before.  Let me talk to him and see what we can do.” Really bothered now by the answers of the teacher and the director, the new pastor approached the deacons and related the whole story, including the responses of the teacher and the director. A white-haired gentleman thoughtfully stroked his chin and said, “Well, Pastor, I move we just take the money from the general fund to pay for the walls and leave it at that.”

I pulled into the gas station to get a drink. When I walked up I noticed these two cops watching a woman who was smoking while pumping gas. I saw her and thought, “Is she stupid?!! With the cops right there too?!” But anyway, I went in and got my drink. As I was checking out, I heard someone screaming. I looked outside and the woman’s arm was on fire! She was swinging her arm and running around going crazy! I ran outside and the cops had put her on the ground and were putting the fire out with their coffees. Then they put handcuffs on her and threw her in the police car. I was thinking, “She shouldn’t have been smoking near the pump while getting gas!” But being the nosey person that I am, I asked the cops what they were arresting her for. The cop looked me dead in my eyes and said…

When my son graduated from high school, he had to give a speech. He began by reading from his prepared text:

“I want to talk about my mother and the wonderful influence she has had on my life. She is a shining example of parenthood, and I love her more than words could ever do justice.” At this point he seemed to struggle for words. After a pause, he looked up with a sly grin and said, “Sorry, but it’s really hard to read my mother’s handwriting.”

An 8-year-old girl went to her dad, who was working in the yard.  She asked him, “Daddy, what is sex?”

He was surprised by the question, but decided that if she was old enough to ask, then she was old enough to get a straight answer.  He proceeded to tell her all about the birds and the bees. When he finished, the little girl was looking at him with her mouth hanging open. Her father asked her, “Why did you ask this question?”

The little girl replied, “Mommy told me to tell you that dinner would be ready in just a couple of secs.”

TEN SIGNS OF A FRUSTRATED MOTHER

Thoughts For The Day

Did you hear about the two silkworms who had a race? They ended up in a tie.

If evolution is true, why do mothers still only have one pair of hands?

Today I went into a bookstore and asked where the self-help section was. The clerk replied, “If I told you, wouldn’t that defeat the purpose?”

for which you would not take money.

On your birthday, send a thank you card to your mom.

Q: How many teachers does it take to change a light bulb?

A: Well, teachers don’t really change a bulb, but they can help to make a dim one brighter.

1: I came to worship in Shiloh with my husband every year. I was barren but when I prayed to God he blessed me with a child.

2: I was a prophet of Israel. I have the cloak which belonged to my predecessor, who left me quite suddenly. At

Bethel some small boys came and made fun of me.

3: My husband and I lied to the apostles about the proceeds on a piece of land we sold. Unfortunately I did not live to tell the tale.

4: I was the first Gentile to be baptised. The apostle Peter came and preached the gospel to me.

5: I was asked to curse the children of Israel but I couldn’t do it. My donkey was given the power of speech for a short while.

6: I was sent to take a letter to the apostle Paul. He chose me to accompany him through Syria and Cilicia on his

missionary work. In Philippi I was thrown in prison. Paul left me in Thessalonica when he was in fear of his life and later I joined him in Corinth.

7: I was a prophetess. My baby brother was adopted by a foreign lady but we met again in late r life. I didn’t approve of his Cushite wife. God gave me leprosy for seven days because I spoke against my brother.

8: I was a Nazarite from the womb. I set fire to a grain harvest using foxes with torches tied to their tales. I carried the city gates of Gaza up to the top of a hill. My girlfriend betrayed me.

9: I was a Pharisee. I came to ask Jesus questions at night but I found his answers difficult to understand. When Jesus died, I brought 75 pounds of myrrh and aloes to anoint his body.

10: I wasn’t a very popular person because of my occupation. A man came past while I was working and asked me to follow him. I got up, left everything and made this man a great feast.