“I Am Potential” is an inspiring, powerful, and heart-touching movie! It is based on the true story of Patrick Henry Hughes, who was born without eyes and the use of his legs. This inspiring movie makes it crystal clear: there is a purpose for all things and God definitely can bring good out of difficult situations. 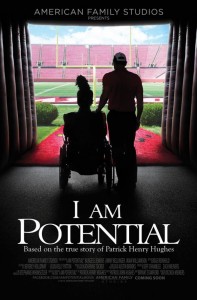 Patrick Henry’s parents, Patrick and Patricia, are ecstatic at the birth of their son, but soon are hit with a harsh reality: he was born without eyes and he probably will never walk. They adapt as well as they can, dealing with stress when Patricia needs more help from Patrick and Patrick must juggle a demanding job and the needs at home, not to mention the medical bills. The cast in this film is outstanding, with Burgess Jenkins as Patrick, Jama Williamson as Patricia, and Jimmy Bellinger as Patrick Henry. Judge Reinhold appears as Dr. Greg Byrne, and he plays an important part in Patrick Henry’s life.

Patrick learns that his son has a love for music; it calms him and he enjoys hitting the piano keys in their home. He develops and has a lot of talent for music. The Hughes family grows as two brothers, Cameron and Jesse, are born. And Patrick Henry continues to amaze everyone with his ability to do things considered beyond his grasp. The sacrifice of the parents is to be commended. Patrick even sells off his impressively nice car in order to keep the family’s finances afloat. In addition, he gets up early to march Patrick Henry in his wheelchair during marching band practice.

This movie will inspire families everywhere! Its themes of sacrifice, family devotion, and overcoming great odds are commendable. Dove awards “I Am Potential” their “Faith-Friendly” Seal for all ages. No family will be the same after watching this movie! This film has earned five Doves, their best rating.