“When you approach a town to attack it, you shall offer it terms of peace.” Deuteronomy 20:10

IDF planes dropped leaflets along the Gaza Border area Friday morning, warning Palestinians not to approach the fence, ahead of mass demonstrations expected later in the day.

“Violent disturbances in recent weeks took advantage of civilians to cover terrorist attacks against Israeli security infrastructures and the IDF,” a military spokesman said in a statement. 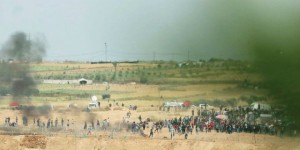 Thousands of rioters disrupting the order near the Israel-Gaza border. (Photo by Elior Cohen/TPS)

“The IDF will not allow damage to security and border infrastructures that protect Israeli citizens and will act against anyone who wants to harm Israel’s security,” the leaflet addressed to the residents of Gaza read.

“You are participating in violent disturbances. Hamas exploits you to carry out terrorist activities. The IDF is prepared for any scenario. Avoid approaching the fence and harming it. Refrain from using weapons and carrying out violent actions against the Israeli security forces and Israeli citizens. Stay away from terrorist elements and elements that promote disorder and violence,” the IDF warning continued.

“The IDF will act against any attempt to damage the barrier and its components and any other military equipment. Hamas uses you to promote the interest of the movement. Do not obey Hamas orders that endanger your life. Your future is in your hands,” the leaflet concluded.

Friday’s protest will be the fourth week in a row of large-scale demonstrations along the Gaza border. The number of participants in last week’s protest was some 10,000 according to IDF sources, compared with around 30,000 in the initial protest three weeks ago. At least 32 people have been killed in clashes, at least 26 of then affiliated to Hamas and other terrorist groups according to Israeli sources.

The protests, labeled “The Great March of Return” are scheduled to take place weekly until Nakba Day on May 15 when a mass march toward Israeli territory is expected. Nakba Day, which means Day of the Catastrophe is marked annually on May 15, a day after the Gregorian calendar date for Israeli Independence Day.