At the U.S. Capitol to hear Pope Francis, Naghmeh Abedini says the Iranians are abusing her husband

The pope didn’t name Iran or Cuba in his speech, but he indicated his support for U.S. policy changes toward both countries. “I would like to recognize the efforts made in recent months to help overcome historic differences linked to painful episodes of the past,” he said. “It is my duty to build bridges and to help all men and women in any way possible to do the same.”

Naghmeh Abedini said her husband is increasingly sent to solitary confinement and suffers attacks from both guards and inmates. His father visited him this week and learned that prison officials attacked him with a stun gun and interrogated him Tuesday. Apparently, additional charges are forthcoming that could lengthen his sentence. 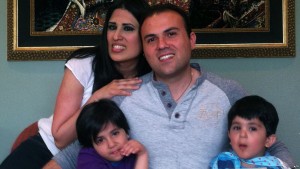 “My husband’s situation has gotten worse,” she told me while sitting in the office of Rep. Robert Pittenger, R-N.C., who invited her to the pope’s address. “Honestly, since the [nuclear] deal, I thought the treatment of my husband would improve.”

This summer, Iran reached a deal with world powers to curb the nation’s nuclear program in exchange for sanctions relief. The pact was expected to improve U.S.-Iran relations, but the Islamic nation has since said it only engaged in dialogue to discuss its nuclear program.

“We’re seeing one thing, talking about friendship and getting along, but we’re seeing something else inside Iran,” Abedini said, a pendant with her husband’s picture hanging from her neck.

Abedini said she didn’t expect a reference to her husband’s plight during the pope’s speech since the Vatican usually takes a more private approach to advocating for prisoners. She’s been told the White House has asked the pope to speak out on behalf of the four Americans imprisoned in Iran.

Pittenger said the U.S. had more than enough leverage to free the prisoners, given the billions of dollars in sanctions relief Iran badly wanted as part of the nuclear agreement. “It would have been such an easy demand,” Pittenger said.

“Exactly,” Abedini said, brushing away tears. “It would have been an easy ask.”

Abedini met last week with Samantha Power, the U.S. ambassador to the United Nations, who admitted the administration thought her husband would be released by now.  “She said they really thought Iran was acting in good faith with the nuclear deal and would release the Americans,” she said. “Their strategy was hoping. My strategy was from day one they should have said, ‘Release the Americans, and then we’ll talk.’”

On the followng Saturday, people in 750 cities and 35 countries gathered for a prayer vigil to mark three years since Saeed Abedini’s imprisonment.

“As a Christian, I believe in the power of prayer,” Naghmeh Abedini said. “When governments fail, I can get on my knees and pray.”