“I set out to do a fictional story about an Army chaplain, but one day I came across this incredible story of Chaplain Darren Turner,” Director David Evans said. “When only half of all marriages survive these days, a true story of a couple’s fight to save their family had to be told.” 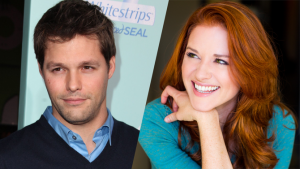 INDIVISIBLE was shot in Memphis, Tennessee; Iraq scenes were filmed near Santa Clarita, California, north of Los Angeles, at the Middle East Village set on Blue Cloud Movie Ranch. The 32-day shoot combined 22 days in Memphis and 10 days in California.

Synopsis—With great anticipation, Darren and Heather Turner are ready to follow their calling: serving God, family and country. But when war etches deep battle scars, the Turners’ once-solid marriage lies in peril. Shaken and forever changed by what they’ve experienced, the couple now faces their toughest battle: the fight to save their marriage.

“God was at work in my life and in my marriage even as I did everything I could to walk out on him and everyone else,” said Chaplain Turner. “He accomplished a miracle in our family. It’s encouraging to us that it matters to people, that it wasn’t in vain, that there is purpose even in our heartbreak.”

In addition to starring in INDIVISIBLE, Sarah Drew also executive produced the film.

“The heart of the film is about marriage,” Drew said. “The military is the setting through which we tell a story about what it means to fight hard for the vows you make on that day you stand before God and before your community and you say, ‘I will love you until the day I die.’”

“INDIVISIBLE shows you were never intended to live this life on your own strength,” said Pastor Lynn Holmes, CEO of Calvary Pictures. “When you invite God, even into your marriage, your marriage is so much better. Most people in ministry have gone through a lot of pain, and God never wastes those difficulties. He never wastes that pain.”

Darren Moorman of Reserve Entertainment produced INDIVISIBLE, in association with Calvary Pictures. The film was funded by Provident Films and Working Title Agency, with Ben Howard and Bill Reeves as executives in charge of production.