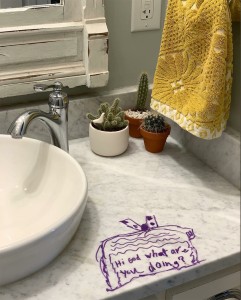 For the last several years, people around the country have fallen in love with Chip and Joanna Gaines. Not only do they have an amazing eye for design as proven by “Fixer Upper,” but they also have strong family values and often share about their Christian faith.

Earlier this year, the Gaines family gained another member when Crew Gaines was born. They are now a family of seven, with 13-year-old Drake, 12-year-old Ella Rose, 10-year-old Duke, 8-year-old Emmie Kay, and newborn Crew.

Now, Joanna Gaines has given us an adorable and inspiring look into her youngest daughter’s relationship with God. She took to social media to share a photo that Emmie Kay had drawn.

Joanna noticed that there was a drawing on the vanity in Emmie’s bathroom. Joanna thought that it was made with a permanent sharpie at first, but later realized it was an erasable marker. When Joanna realized what the drawing was of, however, she realized she wouldn’t have even cared if it was permanent!

Joanna wrote, “Walked into Emmie’s bathroom this morning & my heart stopped for a second when I thought she had sharpied all over her vanity. And then I took a moment and really read what she wrote and thought, ‘Well that isn’t the worst thing to be permanent.'”

Then, she posted a photograph of her bathroom vanity. Emmie had drawn a picture with the words, “Hi God what are you doing?”

Joanna wrote, “Then I touched it & realized it was erasable. I stared at her question & loved the thought of it & that that’s how she talks to God. May her faith always stay childlike & may I remember what she seems to already know. That God is the most relational & most kind & near always.”