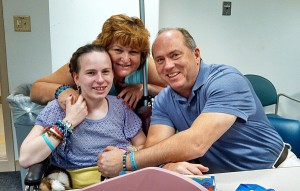 In midst of a fight over Justina Pelletier’s diagnosis, the Massachusetts Department of Children and Families took custody of the girl in 2013. Now, her parents, Linda and Lou Pelletier, are suing the Boston Children’s Hospital for malpractice and violation of her civil rights.

In 2013, Justina was treated by the Tufts Medical Center for mitochondrial disease after she complained of trouble performing basic tasks, such as eating and walking. Yet the Boston Children’s Hospital disagreed, and diagnosed her difficulties as psychiatric. Justina’s parents rejected this diagnosis and intended to take Justina back to Tufts. However, the Boston Children’s Hospital filed a “medical child abuse” complaint against Justina’s parents, and the Massachusetts DCF claimed emergency custody of her.

The Pelletiers fought for custody of their daughter, and finally won in June of 2014. However, their joy at finally having their daughter home again is shadowed by the physical deterioration her body experienced during the 16 months in DCF’s care.

LifeNews previously reported on the negative effects DCF had on Justina, “In her sixteen months under the ‘care’ of the state, Justina Pelletier’s health deteriorated from being a vibrant figure skater to being confined to a wheelchair, unable to walk on her own.”

While Justina was at the hospital, she was allowed only a one-hour visit per week with her mom and dad. She later said she felt “like a prisoner.”

Her family is rightly infuriated by the lack of care Justina received. Lou Pelletier told MailOnline: “I am still very angry at the psychiatrists, Boston Children’s Hospital, and the Department of Families and Children for putting Justina through this. My daughter was used as a lab rat, a cruel experiment…Her condition has deteriorated terribly since she was taken from us. She’s no longer doing jumping jacks and ice skating, she is paralyzed.”

Family spokesman Rev. Patrick Mahoney added, “For almost 18 months, Justina Pelletier and her family had to endure emotional, physical, spiritual and psychological suffering and pain along with major civil rights violations because of the incompetence, neglect and malpractice of Boston Children’s Hospital.”

Although the Pelletier family is overjoyed to have Justina at home at last, they said they will fight to protect other families from the horror of what they endured. They also previously said they plan to sue the state of Massachusetts for what they say was essentially an abduction of their daughter.

Lou Pelletier expressed his determination to prevent this from happening again: “There’s going to be a Justina law,” because hospitals are “taking kids, using DCF to be their little wing man. I’m going to be the guy that’s going to change that.”