The makers of “Facing the Giants,” “Fireproof” and “Courageous” have completed their next film, “War Room,” which spotlights prayer, its power and purpose. Specifically, the movie tells the story of a prayer warrior grandmother (played by Karen Abercrombie) who mentors a young mom (Priscilla Shirer) facing a troubled relationship with her husband (T.C. Stallings).

It will release in theaters Aug. 28.

The impetus for the movie goes back to 2012, when Alex Kendrick said he and his brother felt led by God to “make a movie where we call the body of believers to pray” and to “fight in prayer.” 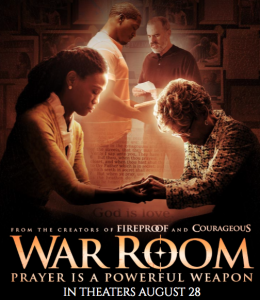 It’s the fifth film for the brother tandem, who have released a string of box office hits that began with the 2006 film “Facing the Giants.” Their last two movies opened in the Top 5, with their most recent one (“Courageous”) No. 1 on the first weekend in per-theater average. All of their films had low budgets by Hollywood standards. Alex is director and plays a character in the film, while Stephen is producer. The film also features Beth Moore and Michael Jr. in supporting roles.

Modern-day prayers, Alex Kendrick said, tend to focus only on things such as healing and travel safety. “Those are elementary prayers,” Kendrick said. “How do we get to the deeper things?”

The movie was filmed in and around Charlotte, N.C., and about 85 churches of different denominations partnered to pray for and assist with the film in any ways needed – from cleaning up the set to giving rides around town. Just like every other Kendrick movie, each day on the set began with a morning devotional, with cast and crew huddled all around.

“My hope for this movie is that people walk way being called to their knees,” said co-producer Gary Wheeler, who is working on his first Kendrick film. “I hope they leave this saying, ‘We have to fight our battles first in prayer. We have to be strategic in the way that we pray – in the way that we attack these struggles in our lives.'”

The cast itself also features a first. Although their films have included minorities in positive lead roles, this movie goes a step further, with an African-American family being the film’s primary focus. Stallings, who is black, said it’s a big deal, specifically because so many mainstream films cast African-Americans in a negative light.

“I am excited that there is a film that will show the other side,” said Stallings, who played a supporting role in the most recent Kendrick film. “Not every African-American man is not with his family. There are those out there who pray, who love the Lord, who are successful. For this movie to do that, it is encouraging. And I like the fact that it shows us winning against sin and problems. We’re victorious, we’re victorious through Christ. Maybe some families will say, ‘We can do that, too. We can come out of this if we pray.'”

Shirer and Stallings were the first choices for the lead roles, Kendrick said. She honed her skills with an acting coach. Alex said she was “fantastic.”  “She’s just poured herself into this role,” Alex said.

Stallings said he enjoyed being part of a film that seeks to make an impact on people. “I like that when you’re done watching the film, it makes you want to go and do something,” he said. “For instance, I went and saw a couple of movies the other day, and they were awesome. But when they were done, I’m done. I can’t put on a cape and fly.”

Kendrick Brother Films, he said, seek to make “your life better and other people’s lives better.” “This one hopefully will encourage people to pray and connect with God,” Stallings said.

For more information, visit WarRoomTheMovie.com. It is rated PG for thematic elements.