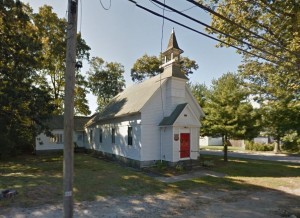 (Johnston, R.I) On January 25, 2016 King’s Tabernacle Church filed a federal lawsuit against the town of Johnston after giving town officials ample time to correct its opposition to the church and address the racist conduct of its Zoning Official Ben Nascenzi. Early last year, King’s Tabernacle purchased the 124 year old church located at 500 Greenville Avenue from the Belknap Community Church. However, the town would not allow King’s Tabernacle, a predominantly African-American congregation, to meet at its new property without a “special use permit.” Even though the quintessential church building had been used for religious assembly for over a century, Johnston’s Zoning Board of Review voted unanimously in June 2015 to deny the church zoning. The Church appealed the denial to the superior court. That appeal is still pending.

After the denial, Mr. Nascenzi was caught on video making foul and racist comments about the Church’s “black” ownership. Mayor Joseph M. Polisena offered to meet and apologize, but ultimately the town chose to retain Mr. Nascenzi and did nothing to correct its zoning decision.

“This is 2016. This the United States of America. This type of government behavior is outrageous and should have been corrected immediately.” said the Rev. Chris Abhulime. “Though the laws have certainly changed for the better since 1891, the heart of man has remained the same—which is why Jesus’s message of repentance and forgiveness for our sins remains such good news.”
The federal lawsuit was filed by Mauck & Baker, LLC, a Chicago law firm which litigates religious land use cases all across the country, and Warwick attorney Andrew J. McKay. The lawsuit challenges the Town’s discriminatory zoning code which freely permits non-religious assemblies, like theaters and concert halls, at the Church’s property but does not freely permit religious assembly.

“We can all agree that there is no place for religious or racial discrimination in America. Our country’s guarantee that everyone is entitled to equal treatment under the law trumps a municipality’s interest in tax revenue and certainly the racial prejudices of a zoning official.” said Mauck & Baker attorney Noel W. Sterett. “It is well past time for Johnston to make things right and we hope they will. If they do not, we are confident that the court will.”