(WNS)–Lebanese Prime Minister Saad Hariri’s resignation during a trip to Saudi Arabia is the latest bombshell in a string of recent events that place Lebanon in the middle of the power play between regional rivals Saudi Arabia and Iran. The events have escalated the tussle between the two major rivals in the region and could leave Lebanon facing possible sanctions or further conflict.

In a televised Nov. 12 interview from Saudi Arabia, Hariri denied claims his hosts detained him or forced him to resign his post. Hariri appeared tired and held back tears at one point but promised to return to Lebanon “within days.” He hinted he might even withdraw his resignation if Lebanon’s Islamist political party Hezbollah committed to remain neutral in regional conflicts. 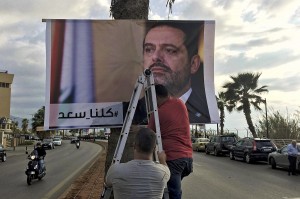 Workers hang a poster of outgoing Prime Minister Saad Hariri with Arabic words that read:”We are all Saad,” at a seaside street in Beirut, Lebanon, Thursday, Nov. 9, 2017. Hezbollah has called on Saudi Arabia to stay out of Lebanese affairs, saying the resignation of Prime Minister Saad Hariri, announced from Riyadh over the weekend, “has raised many questions.” (AP Photo/Hussein Malla)

In recent weeks, Saudi Arabia also shut down its borders with war-torn Yemen after it intercepted a missile launched by the country’s Iranian-backed Houthi rebels. Saudi officials and a U.S. Air Force commander confirmed Iran manufactured the missile. And Yemeni officials on Tuesday accused the Saudi-led coalition of bombing the airport in the Houthi-controlled capital, Sanaa.

“There are a lot of lower-level conflicts that are somehow tied into these greater regional tensions,” said Adam Baron, a visiting fellow at the European Council on Foreign Relations.

Saudi Arabia has long accused Lebanon’s Hezbollah political party of supporting Iran. In his Sunday speech, Hariri said he formed Lebanon’s unity government with Hezbollah on the grounds that it would not interfere in regional affairs. He accused Hezbollah of breaking its side of the deal, citing its interference in Yemen as an example. Saudi Arabia accused Iran and Hezbollah of aiding the Houthi’s Nov. 4 attempted missile attack.

Hussein Ibish, a senior resident scholar with the Arab Gulf States Institutes in Washington, D.C., said Yemen’s missile enraged the Saudis, but Iran’s growing influence amid its conquests in the fight against ISIS poses a bigger threat to the nation. Iran supported Iraq’s seizure of the Kurdish-held city of Kirkuk and gained territorial control in the fight against Islamic State (ISIS) militants. Iran’s leading role in the conflict has left it and its allies in control of a land bridge that passes through the center of Iraq and Syria, including access to a seaport.

“It’s a strategic game changer,” Ibish said. “There was nothing the Saudis could do to stop it. The only thing was to hit at Hezbollah at their epicenter, which is in Lebanon.”

Hariri warned Hezbollah’s continued meddling in the region could expose Lebanon to sanctions that will affect its trade and thousands of Lebanese in the region.

Thomas Lippman, author of Saudi Arabia on the Edge, said it is unlikely Hezbollah will give in to Hariri’s request.

“The only value Hariri has to Hezbollah is to give them a token Sunni Muslim as part of their government,” he said. “Hezbollah is calling all the shots and everyone can see that.” Ibish said the problem with Saudi Arabia’s political agenda is its dependence on a lot of factors it can’t control: “There’s not much they can do. They can create the political condition, but they can’t dictate the outcome.”