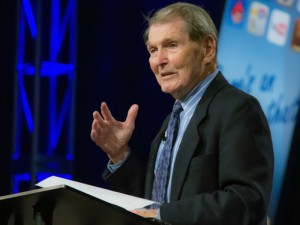 (WNS)–Christian minister, political activist, and author Tim LaHaye died July 25 after suffering a stroke. He was 90.

Best known for co-authoring the widely popular Left Behind book series, LaHaye inspired a generation to think about the end times.

In 1994, LaHaye was on an airplane when he noticed a pilot flirting with a flight attendant. He thought to himself, what would happen if the rapture occurred in that moment? What would it be like for those left behind while Christians vanished into thin air during the second coming of Christ?

LaHaye soon partnered with Jerry B. Jenkins to begin work on a series of novels depicting a fictional account of the premillennial dispensationalist interpretation of Christian eschatology.

The first Left Behind novel debuted in October 1995 and opened with a scene aboard a passenger plane after Christians vanished in mid-flight. The books in the series went on to sell more than 65 million copies, inspiring several major motion pictures and numerous spin-offs.

The series invoked many criticisms from Christian leaders, who claimed it depicted an inaccurate portrait of Scripture, but LaHaye’s influence was undeniable. His literary work set the ideas many Christians and non-Christians now hold about how the world will end.

Jenkins called LaHaye a “model, a mentor, a father figure, and a friend.”

“Thrilled as I am that he is where he has always wanted to be, his departure leaves a void in my soul I don’t expect to fill until I see him again,” Jenkins said today.

In 2005, Time Magazine named LaHaye and his wife Beverly to its list of America’s 25 most influential evangelicals.

LaHaye was born to Christian parents in Detroit, Mich., in 1926. In 1944, he enlisted in the Air Force and served as a machine gunner aboard a bomber while war waged in Europe.

He later attended Bob Jones University, where he met his wife and developed a desire to go into ministry.

After completing a Doctorate of Ministry at Western Seminary, LaHaye moved his young family to San Diego, where he pastored Scott Memorial Baptist Church for 25 years. He often met with Christian leaders and spoke at Birch Society training sessions, slowly building clout throughout southern California.

In the 1970s, LaHaye became increasingly political, alarmed by court decisions to legalize abortion and ban prayer in public schools.

In 1979, he partnered with fellow Baptist pastor Jerry Falwell to establish the Moral Majority, a political movement to draft conservative Christians to influence politics. The Moral Majority became a core constituency for President Ronald Reagan in the 1980s.

But LaHaye later polarized many Christians in 1988 when Jack Kemp booted him from his presidential campaign because of his negative view of Catholics. LaHaye claimed Catholics practiced pagan rituals and strayed from biblical truth. He even referred to the pope as the Antichrist.

Despite the controversy, LaHaye remained a significant figure in public policy debates.

His wife Beverley founded Concerned Woman for America (CWA) in 1979, an organization she still chairs today. CWA is the nation’s largest women’s public policy organization and has been instrumental in lobbying lawmakers on issues important to Christians.

LaHaye and Falwell remained good friends until Falwell’s death in 2007. Falwell founded Liberty University in 1971, which is now the largest Christian university in the world. LaHaye donated millions of dollars to the school over the course of his life. Liberty’s School of Prophecy opened in 2002 and Falwell named it after LaHaye.

Since the 1970s, LaHaye has written more than 50 books on a range of topics, both fiction and non-fiction. But even Falwell said LaHaye’s legacy will always be the Left Behind series: “In terms of its impact on Christianity, it’s probably greater than that of any other book in modern times, outside the Bible.”