(WNS)–Legislation introduced in Congress earlier this month would prohibit government discrimination against faith-based adoption and foster care organizations that are not willing to place children with same-sex couples.

The Child Welfare Provider Inclusion Act, sponsored by Sen. Mike Enzi, R-Wyo., and Rep. Mike Kelly, R-Pa., was re-introduced on March 4. Enzi and Kelly submitted the same bill last year, but it never made it out of committee. The act would ensure state-licensed child welfare providers are allowed to operate while also holding to religious and moral convictions on homosexuality and family structure.

“This commonsense bill simply ensures that these child welfare providers can keep doing what they do best and are treated the same as the rest,” Kelly said. “When it comes to helping kids and making families stronger, all service providers—religious or otherwise—should have a seat at the table. … No provider should ever have to forfeit their First Amendment rights in order to create a better life for a child.” 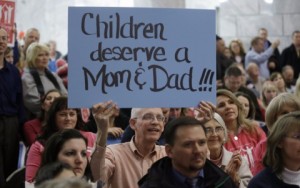 In four states—California, Illinois, Massachusetts, and the District of Columbia—faith-based adoption and foster care providers have been forced to stop providing services because they refused to place children with same-sex couples. Boston Catholic Charities, a 100-year-old organization that had placed more children in permanent adoptive homes than any other state-licensed agency, was forced to end its foster care and adoption programs in 2006. Since then, a number of other faith-based providers, including D.C. Catholic Charities, Catholic Charities of Illinois, and Illinois’ Evangelical Child and Family Agency, have been forced to transfer adoption and foster care programs to other providers.

“In the name of tolerance, we’re not being tolerated,” Bishop Thomas J. Paprocki of the Diocese of Springfield, Ill., told The New York Times.

Opponents argue the bill does the opposite of what it claims. “In truth, the bill’s name is deceptive,” Rich Valenza, founder and CEO of RaiseAChild.US, wrote in an editorial at the Huffington Post. “It is about exclusion, not inclusion. It is designed to allow religious foster and adoption agencies to deny services to all ‘nontraditional’ prospective parents.”

But the bill’s sponsors and supporters argue the measure would not exclude anyone. Any couple, regardless of their sexual orientation, can apply to adopt with an agency in their state.

“Protecting religious liberty in this instance takes nothing away from anyone,” The Heritage Foundation’s Sara Torre and Ryan T. Anderson wrote. “Couples who do not wish to work with faith-based agencies because of a difference of belief are free to work with another private provider or directly with the state offering foster care services. A diversity of providers only increases the chances more children will end up in permanent, loving families.”

About 400,000 children spend time in the foster care system each year. Of those, roughly 100,000 are eligible and waiting to be adopted, according to the U.S. Children’s Bureau.

Support for same-sex adoption is on the rise, according to a May 2014 Gallup survey. When asked if same-sex couples should have the legal right to adopt a child, 63 percent of those surveyed said yes, up from 46 percent in 2007.  A smaller number, 55 percent, expressed support for same-sex marriage.