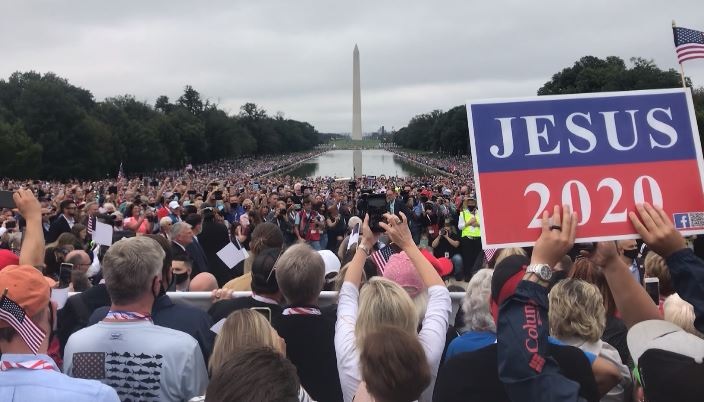 I went to Washington D.C. in early October to attend “The Return” and the “Franklin Graham Prayer March.” Tens of thousands (at least) attended.  This event was powerful and I believe the impact will be felt for years to come.

Pierre Bynam of the Family Research Council wrote of the event:

“I am writing this to urge every praying reader who missed The Return to rush to watch every minute of it, then to send links to everyone you know…If you were there, you know what I mean. I have been to hundreds of great, Christian events over the past several decades, many of them truly historic. This was not just an event; it was a Kairos (Strong’s G2540) and Chronos (G5550) time in American and Christian history. Early Saturday morning, The Return team learned that 40 million Americans had viewed the Friday evening segment online or via television. Upwards of 250 million and as many as 400 million had viewed the same segment overseas (it was broadcast in 90 languages). Time does not allow me to describe The Return. You must prayerfully visit the site and see The Return for yourself, and repent and pray along with those who have already taken part. Our return to God as a people is America’s only hope!”

It has never been so clear to me that PRAYER and REPENTANCE alone will save our nation from further decline and destruction. While I was in Bible College in the early 90’s, David Wilkerson (who founded Teen Challenge Int’l), spoke at a chapel service. Something he said has always stuck with me: “God will give a nation (a people) the leaders they really want.”

What kind of leaders do you want? Thankfully, we’re not voting for America’s savior – only Jesus is that. No other person will be able to fill that role, or live up to the perfect character of Jesus. But a comparison of the leading presidential candidates – and their parties’ platforms – does reveal a stark contrast.

Vice President Mike Pence delivered the opening remarks at the prayer march: “In these challenging times we do well to remember that in everything by prayer and petition with thanksgiving that we are to present our requests to God. And then, we can claim the promise that the Peace of God that passes all understanding will guard our hearts and minds in Christ Jesus as His grace has through the generations of this nation.”

Franklin Graham also spoke before the march saying, “We need to be the ‘United’ States of America, not the divided states of America. Ultimately, our hope is not in a Republican or a Democrat. Our only hope is God and if as Christians we don’t pray for God’s help, he may just let this country fail.”

So, please encourage your church family to pray. Please consider becoming a monthly supporter of Family Policy Alliance’s efforts in Rhode Island so we can continue to make Rhode island a state where God is honored, religious freedom flourishes, families thrive and life is cherished.

Chairman, Board of Advisors – Rhode Island