Local Film Honored With a Red Carpet Premiere In Hollywood

WHITINSVILLE, MA. –  Miracles really do happen.  FOOTPRINTS, a locally produced feature film, was recently honored at the Pan-Pacific Film Festival in Los Angeles, CA with a red carpet premiere event in the heart of the world’s entertainment capital. While movies are showcased in Hollywood on a regular basis, films like FOOTPRINTS rarely gain such recognition.  You see, even though FOOTPRINTS was filmed with a cast and crew of over 540 people across 15 cities and towns throughout Massachusetts and Rhode Island, it was done without any money.  Which in the entertainment industry, is a miracle all by itself.

Unable to raise the needed funds, the producers decided to go ahead anyway and make this film on faith instead.  As Jim Huggins, the film’s director, co-producer, and co-writer and a Whitinsville, MA resident noted, “It seemed only appropriate to step out in faith ourselves as FOOTPRINTS is a story inspired by the true events of one man’s journey of faith in his own life.” 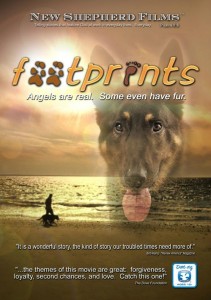 “It was an honor to have our film premiered in Los Angeles,” Huggins said.  “To us it simply underscores the power of a good story…they have a way of getting out and getting told.”  Having already received numerous awards, including the Dove Award for family entertainment and a “4+ Exemplary” rating from MovieGuide.org in Hollywood, FOOTPRINTS is gaining worldwide recognition.  As one reviewer wrote (Bob Kemp, Renew America Magazine), this is “…a wonderful story, the kind of story our troubled times needs more of.”  Daryl Madore (The Times Record) commented “This movie is so well done, even a cat person will love it!”

In addition to the Red Carpet event, Huggins, an award-winning actor, filmmaker, writer, and speaker was asked to participate on a director’s panel alongside other industry professionals from Hollywood to teach and inspire an upcoming generation to produce faith and family content.  “The most common question I was asked was ‘why do you think faith-based entertainment is needed in Hollywood?’” Huggins said.  His answer was simple.  “Society is a reflection of the stories it’s told—of the entertainment it chooses to read and watch.  So ask yourself, are you happy with how society is going these days?  If not, try telling different stories.”

New Shepherd Films, a local, independent, faith-based film production and entertainment company with offices in Fall River and Whitinsville, offers family entertainment with Christian-oriented themes based on real life events without a heavy-handed approach to presenting faith-based values.  “We don’t produce a ‘sermon-in-a-box’ or hit people over the head with the Bible.  We simply tell true stories from a perspective of faith.” says Huggins, the Founder and CEO of the company.  Their focus is to tell true stories that are uplifting and inspiring and that appeal to the broadest audience possible regardless of age or faith.

New Shepherd Films next project is entitled “Forgotten Heroes” and is inspired by the true events of the only Military Working Dog Handler in Vietnam to have received the Medal of Honor.  A twenty year US Air Force veteran, Huggins says “We’re anxious to get started on this one!”

To learn more about this film including where to get it, visit www.footprintsmovie.com.  Be sure to also visit and ‘Like’ their fan page on Facebook at www.facebook.com/footprintsmovie.  Information on Forgotten Heroes can be found at www.forgottenheroesmovie.com as well as on its Facebook fan page at www.facebook.com/forgottenheroesmovie.   You can also contact New Shepherd Films by email at info@newshepherdfilms.com, their website at www.newshepherdfilms.com, or by calling (508) 536-3188.