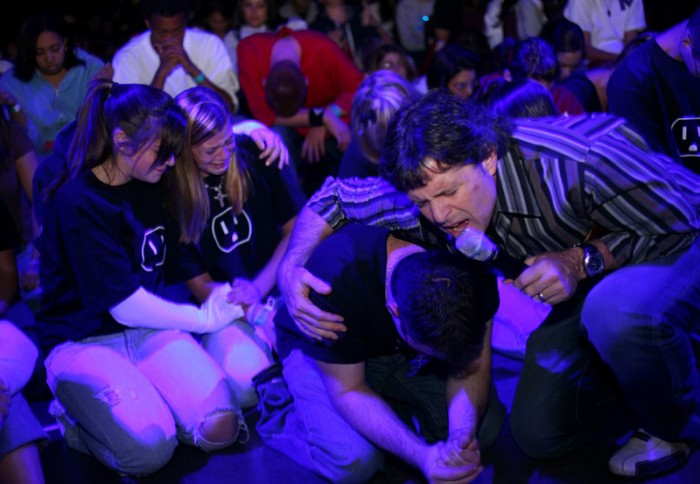 Ron Luce prays with teenagers who came forward during an alter call at Acquire the Fire, an evangelical Christian event aimed at bringing teenagers back into the religious fold.

(WNS)–Ron and Katie Luce founded Teen Mania Ministries in 1986 with a goal to “raise up young people who would change the world.” By the numbers, they’ve been successful: Three million attendees at its weekend Acquire the Fire events, more than 70,000 taking summer mission trips called Global Expeditions, and thousands of teens who traveled to the organization’s 472-acre campus near Tyler, Texas, for year-long programs.

On Feb. 3 this year, Ron Luce called the management team into his newly renovated conference room with its four flat screen televisions, leather chairs, and a glass-top conference table. Luce then dropped a bombshell: Teen Mania would abandon the 472 acres and move to a still-undetermined site in Dallas. Luce framed the decision as one that would allow the ministry to have a global reach, and unveiled a press release that did not use the words “default” or “foreclosure”—appropriate terms for what was happening.

That was the first time Teen Mania communications director Cindy Mallette heard about the move. She later found out that Teen Mania had stopped paying its mortgage in November so as to meet payroll, and had then gone into default. After Mallette, who was fielding a flood of inquiries, prodded Luce to acknowledge a foreclosure was occurring, the ministry fired her on Feb. 13. She now states that Luce was hiding “the full nature of the situation” in the hope that funders would “donate to this new vision.”

Since February I’ve reviewed financial documents and interviewed current and former Teen Mania employees, a former board member, and Ron Luce, with the goal of learning how a once-flourishing ministry landed in foreclosure. I found many people who defend Teen Mania but not Luce, whom they accuse of mismanagement and unethical behavior. Luce himself admitted in a Feb. 11 taped conference call with supporters, “Evidence that my leadership is lacking seems to be everywhere.” 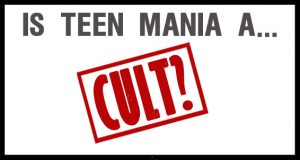 Luce used his charismatic personality to gain support: “He’s a phenomenal communicator, great visionary, and I think he passionately loves Jesus,” said David Hasz, who spent 17 years at the ministry. That passion is reflected in all the programs, and has led to controversy: Teen Mania endured intense criticism in 2011 after a one-hour MSNBC documentary showed its teens eating worms and crawling through mud. Luce, saying the show was deceptive, quickly hired Mallette as the organization’s first communications director.

Teen Mania’s financial woes have been building for more than a decade. Daniel Williams, a Teen Mania board member from 1995 to 2012, cited three primary reasons: the 9/11 attacks, the 2008 recession, and an organizational structure that “worked really well when it was small, but it got too big to manage.”

The ministry hasn’t suffered from a lack of revenue: Teen Mania has brought in almost $300 million since 2001. Jacob Morales, a former volunteer who went on four Global Expeditions trips, left Chase Manhattan to become Luce’s executive assistant in 2007 and 2008. Acting as liaison between Luce’s office and the accounting department, Morales saw “reckless spending. … Letters are going out saying, ‘Help, help, we’re going under,’ yet we’re dropping $100,000 for a guy who is going to speak for 50 minutes.”

That payment, Morales said, went to Dallas minister T.D. Jakes to get him to speak at a New York City BattleCry event on Feb. 8, 2008. (Jennifer Saunier, then Teen Mania’s sales director, confirmed that figure; Jakes’ organization did not respond to a request for comment.) Morales says Teen Mania chartered a $21,000 private jet and spent more than $4,000 on a two-night stay at the Ritz Carlton for Jakes, whom Luce wanted as a Teen Mania partner. Morales says he had discretion over $10,000 in cash to buy imported flowers, chocolates, rare bread, candy, iPods, and other gifts for the Jakes family to find in their hotel suite, green room, and two Cadillac Escalade limousines.

Saunier, Teen Mania’s development director in 2011 and 2012, says she would solicit donations for specific projects, but “was never comfortable that we were doing the right things with those funds.” She raised her concerns to superiors and nothing changed. Luce ran in a December 2012 marathon “to raise awareness and support for reaching America’s 26 million teens with the gospel of Christ.” The effort generated about $250,000 in donations, but within months Luce spent $68,000 on campus carpeting projects, $45,000 to install a coffee shop, and $25,000 to build the new conference room. At least one employee resigned in protest.

Several nonprofit and accounting experts criticize Teen Mania’s 2005 purchase of a 50 percent share in Creation Festivals, an annual Christian music festival, for $4.5 million—financed by the owner and a $2 million loan against Teen Mania’s since-foreclosed property. After the acquisition lost half its value, Teen Mania sold it in 2010 to His Work Ministries, which Ron Luce founded and operates. His Work Ministries (HWM) still owes Teen Mania an undisclosed amount of money.

This gets complicated, but here are the basics: Repayment is contingent upon profitability, and Ron Luce says Creation Festivals has “struggled.” The Creation Fest website says its two events together draw over 100,000 attendees annually who purchase tickets for between $48 and $120 each. It’s hard to make a detailed assessment because HWM has never filed the required IRS Form 990, and Luce says he didn’t know he needed to file one for the organization. The IRS revoked HWM’s tax-exempt status in 2012.

Luce told supporters His Work Ministries has “nothing to do with Teen Mania,” but a comprehensive third-party audit conducted in 2011—and obtained by WORLD—repeatedly cited the “unusual transaction” as problematic. It also cited a donor in 2008 who withdrew a $6 million pledge “due to his dissatisfaction with the investment decision.” Daniel Williams, the former board chairman, said Paul Nelson—who through the ECFA declined to comment for this story—raised ethical and legal concerns about the transaction, but they were resolved. Luce told me no one raised any concerns.

The cumulative result was a sea of red ink: Teen Mania Ministries had total net assets of negative $4.1 million at the end of fiscal 2011, a statistic that makes it the sixth-most insolvent charity in the nation, according to Charity Navigators. The 2011 audit says: “A discerning donor will quickly see TMM is technically bankrupt—this is a matter that demands an explanation.”

Accounting expert Albert Meyer, the president of Bastiat Capital who identified irregular accounting practices at Enron, Tyco, and elsewhere, reviewed Teen Mania’s recent IRS 990s and told me he saw a variety of red flags, including high debt load and overspending: “Cutting a $1.37 million shortfall by $220K is how they do business in Washington.”

HOW COULD ALL THIS go largely unnoticed for so long? Bill Josephson, former assistant attorney general-in-charge of the New York Charities Bureau, said it appears Teen Mania is an 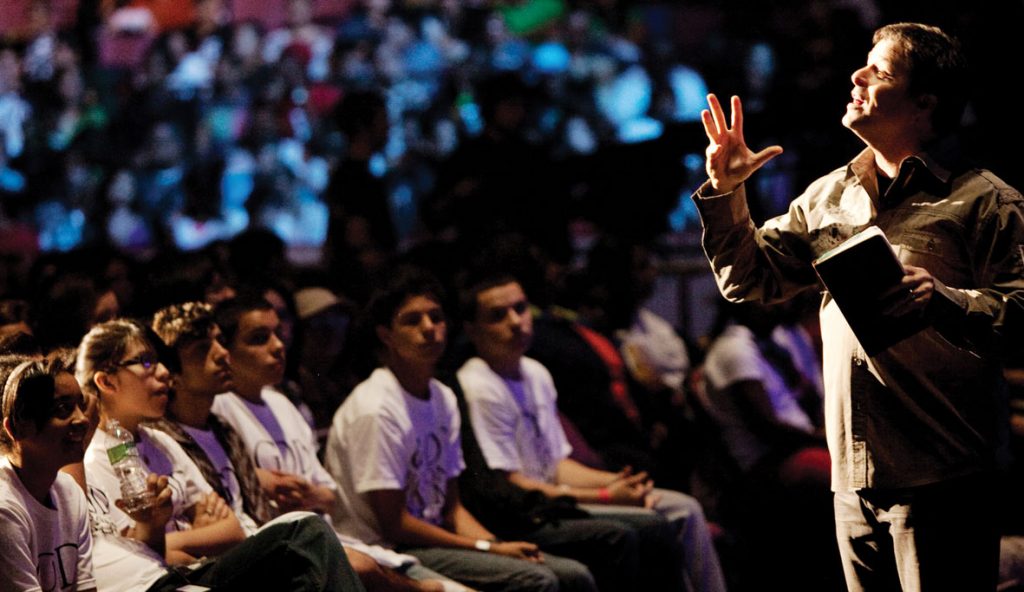 example of “Red Cross governance”—using designated funds for other purposes. The Red Cross has a board of governors willing and able to remove its president, as it has done—yet Teen Mania board members and staff who clash with Luce have ended up leaving the organization.

For example, on March 15, 2012, Ron and Katie Luce met with board members Daniel Williams and Paul Nelson, CFO Jonathan Hasz, and vice president of operations David Hasz, to discuss concerns and the organizational audit that Teen Mania received in January. Within six months, the Luces were the only ones standing: Williams, Nelson, Tom Muccio (another top board member), and the Hasz brothers all were gone.

According to the Teen Mania bylaws, also obtained by WORLD, Luce can only be removed by a unanimous vote—a virtual impossibility since Katie Luce sits on the eight-member board. The audit recommended removing or revising Ron Luce’s almost unlimited presidential powers and replacing Katie Luce as a voting board member, but neither happened.

Numerous former employees said they were hesitant to speak out because they believe Teen Mania is doing good work—a common reason for not holding Christian nonprofits accountable. “The fruit has been incredible,” David Hasz told me. He said many concerned parties used the Matthew 18 approach of problem-solving with Luce: “I wanted that ministry to continue into the future, but I and others expressed serious concern that our financial model wouldn’t work.”

Teen Mania remained a member in good standing of the Evangelical Council for Financial Accountability since 1996—a claim Teen Mania continued to make on its website as of April 15, even though ECFA revoked its membership on March 10 for “failure to provide complete renewal information.” ECFA president Dan Busby points out his organization is a pass/fail accrediting agency for 1,850 members, not a watchdog group. Luce assured me Teen Mania is simply late with its audit and will be reinstated soon: “We’re running a semi down the road at 70 miles an hour, and we’re changing the tires while we’re moving.”

According to Busby, the ECFA, which is supported by member dues, only revokes membership two or three times per year. Albert Meyer said many Christians likely put too much faith in ECFA membership and noted it’s very difficult—”almost impossible”—to have an effective third-party watchdog organization. But he did point to one criterion the ECFA should require: posting financial statements online. Meyer said it’s alarming that Teen Mania does not do so: “If I can get it by writing a letter, why can’t they just post it on the website?”

Meyer said that for Christian organizations to maintain credibility, board members must remember their duties don’t begin and end with fundraising: “When it comes to corporate governance, board members need to explain what exactly they are overseeing—other than attend retreats that masquerade as oversight sessions. Once you take money from the public for a good cause, you better make sure the cause remains good.”