How the Elderly Lose Their Rights 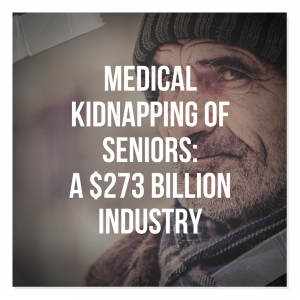 For years, Rudy North woke up at 9 a.m. and read the Las Vegas Review-Journal while eating a piece of toast. Then he read a novel—he liked James Patterson and Clive Cussler—or, if he was feeling more ambitious, Freud. On scraps of paper and legal notepads, he jotted down thoughts sparked by his reading. “Deep below the rational part of our brain is an underground ocean where strange things swim,” he wrote on one notepad. On another, “Life: the longer it cooks, the better it tastes.”

Rennie, his wife of fifty-seven years, was slower to rise. She was recovering from lymphoma and suffered from neuropathy so severe that her legs felt like sausages. Each morning, she spent nearly an hour in the bathroom applying makeup and lotions, the same brands she’d used for forty years. She always emerged wearing pale-pink lipstick. Rudy, who was prone to grandiosity, liked to refer to her as “my amour.”

On the Friday before Labor Day, 2013, the Norths had just finished their toast when a nurse, who visited five times a week to help Rennie bathe and dress, came to their house, in Sun City Aliante, an “active adult” community in Las Vegas. They had moved there in 2005, when Rudy, a retired consultant for broadcasters, was sixty-eight and Rennie was sixty-six. They took pride in their view of the golf course, though neither of them played golf.

Rudy chatted with the nurse in the kitchen for twenty minutes, joking about marriage and laundry, until there was a knock at the door. A stocky woman with shiny black hair introduced herself as April Parks, the owner of the company A Private Professional Guardian. She was accompanied by three colleagues, who didn’t give their names. Parks told the Norths that she had an order from the Clark County Family Court to “remove” them from their home. She would be taking them to an assisted-living facility. “Go and gather your things,” she said.

Rennie began crying. “This is my home,” she said.

One of Parks’s colleagues said that if the Norths didn’t comply he would call the police. Rudy remembers thinking, You’re going to put my wife and me in jail for this? But he felt too confused to argue.

Parks drove a Pontiac G-6 convertible with a license plate that read “crtgrdn,” for “court guardian.” In the past twelve years, she had been a guardian for some four hundred wards of the court. Owing to age or disability, they had been deemed incompetent, a legal term that describes those who are unable to make reasoned choices about their lives or their property. As their guardian, Parks had the authority to manage their assets, and to choose where they lived, whom they associated with, and what medical treatment they received. They lost nearly all their civil rights.

Without realizing it, the Norths had become temporary wards of the court. Parks had filed an emergency ex-parte petition, which provides an exception to the rule that both parties must be notified of any argument before a judge. She had alleged that the Norths posed a “substantial risk for mismanagement of medications, financial loss and physical harm.” She submitted a brief letter from a physician’s assistant, whom Rennie had seen once, stating that “the patient’s husband can no longer effectively take care of the patient at home as his dementia is progressing.” She also submitted a letter from one of Rudy’s doctors, who described him as “confused and agitated.”

Rudy and Rennie had not undergone any cognitive assessments. They had never received a diagnosis of dementia. In addition to Freud, Rudy was working his way through Nietzsche and Plato. Rennie read romance novels.

Parks told the Norths that if they didn’t come willingly an ambulance would take them to the facility, a place she described as a “respite.” Still crying, Rennie put cosmetics and some clothes into a suitcase. She packed so quickly that she forgot her cell phone and Rudy’s hearing aid. After thirty-five minutes, Parks’s assistant led the Norths to her car. When a neighbor asked what was happening, Rudy told him, “We’ll just be gone for a little bit.” He was too proud to draw attention to their predicament. “Just think of it as a mini-vacation,” he told Rennie.

After the Norths left, Parks walked through the house with Cindy Breck, the owner of Caring Transitions, a company that relocates seniors and sells their belongings at estate sales. Breck and Parks had a routine. “We open drawers,” Parks said at a deposition. “We look in closets. We pull out boxes, anything that would store—that would keep paperwork, would keep valuables.” She took a pocket watch, birth certificates, insurance policies, and several collectible coins.

The Norths’ daughter, Julie Belshe, came to visit later that afternoon. A fifty-three-year-old mother of three sons, she and her husband run a small business designing and constructing pools. She lived ten miles away and visited her parents nearly every day, often taking them to her youngest son’s football games. She was her parents’ only living child; her brother and sister had died.

She knocked on the front door several times and then tried to push the door open, but it was locked. She was surprised to see the kitchen window closed; her parents always left it slightly open. She drove to the Sun City Aliante clubhouse, where her parents sometimes drank coffee. When she couldn’t find them there, she thought that perhaps they had gone on an errand together—the farthest they usually drove was to Costco. But, when she returned to the house, it was still empty.

That weekend, she called her parents several times. She also called two hospitals to see if they had been in an accident. She called their landlord, too, and he agreed to visit the house. He reported that there were no signs of them. She told her husband, “I think someone kidnapped my parents.”

On the Tuesday after Labor Day, she drove to the house again and found a note taped to the door: “In case of emergency, contact guardian April Parks.” Belshe dialed the number. Parks, who had a brisk, girlish way of speaking, told Belshe that her parents had been taken to Lakeview Terrace, an assisted-living facility in Boulder City, nine miles from the Arizona border. She assured Belshe that the staff there would take care of all their needs.

In the United States, a million and a half adults are under the care of guardians, either family members or professionals, who control some two hundred and seventy-three billion dollars in assets, according to an auditor for the guardianship fraud program in Palm Beach County.

Little is known about the outcome of these arrangements, because states do not keep complete figures on guardianship cases—statutes vary widely—and, in most jurisdictions, the court records are sealed.

A Government Accountability report from 2010 said, “We could not locate a single Web site, federal agency, state or local entity, or any other organization that compiles comprehensive information on this issue.”

A study published this year by the American Bar Association found that “an unknown number of adults languish under guardianship” when they no longer need it, or never did. The authors wrote that “guardianship is generally “permanent, leaving no way out—‘until death do us part.’ ”