Mega-Merger Would Have One Company Dominating Food, Drugs Globally 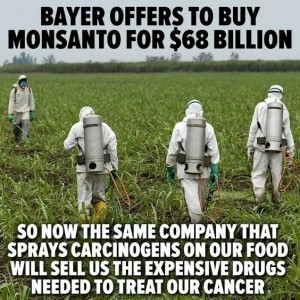 Big Pharma company Bayer’s $66 billion buyout of the world’s largest genetically modified seed maker Monsanto could leave one company controlling the bulk of food and drug production around the world. Oddly, though, this frightening scenario is receiving scant attention in the mainstream press despite its implications.

German pharmaceutical powerhouse Bayer announced its plan to purchase the American company, Monsanto, best known for its proliferation of glyphosates and genetically modified organisms (GMOs), in a $66 billion cash deal.

Even those outside the so-called clean foods movement are concerned because of the potential for monopolization of the food supply, not only in the U.S., but also in much of the rest of the world.

Bayer has its own dark history, as well. In one deplorable example shared by Papantonio, Bayer’s Factor VIII, a blood clotting agent, was found to be tainted with HIV. After being forbidden from selling it in the U.S., Bayer sold it in Asian and Latin American countries without warnings, infecting people worldwide.

Bayer is also the maker of the controversial antibiotic known as Cipro, a fluoroquinolone, which now has a black box warning by the FDA, because the risks outweigh the benefits for moderate bacterial infections. The black box warning came after public outcry from many Americans who were given Cipro and other fluoroquinolones for mild to moderate infections and who suffered serious side effects.

Bayer also makes Xarelto, a blood thinner now the subject of many lawsuits because it is implicated in causing hemorrhagic strokes.

Aside from the checkered past of Bayer and Monsanto, establishment experts are expressing concern that food and drug prices will continue to rise. Sen. Bernie Sanders (D-Vt.) told Reuters on Sept. 15, the Bayer/Monsanto merger is “a threat to all Americans.” Sanders added: “These mergers boost the profits of huge corporations and leave Americans paying even higher prices.”

Some experts suggest the deal may not be approved by the U.S. Federal Trade Commission (FTC), even though the two powerhouses have substantial influence at all levels of federal government. David Balto, a former policy director at the FTC, stated Bayer and Monsanto “are in for a tough time.”

Sen. Chuck Grassley (R-Iowa) scheduled a hearing to start investigating the merger in light of his farming community constituents who are concerned that seed and chemical costs will substantially rise.

Grassley wrote in a statement: “Iowa farmers who I’ve spoken with are worried about rising input costs, especially in an increasingly weak agriculture economy.”

Grassley continued: “[The Bayer/Monsanto merger] announcement will only heighten those concerns. As mergers continue to occur in the seed, agrochemical, and fertilizer industries, federal antitrust regulators must be ever more vigilant to ensure a robust competitive environment in this important sector.”

Papantonio was less diplomatic when he made the point that American law now deems corporations to have the same legal status as people, saying Bayer and Monsanto are “people who should probably be in prison, rather than engaging in mergers.”