Monk run over by US tank, then attacked by ISIS, now ministers to refugees

First he was run over by a US tank, then ISIS forced him to flee his monastery in northern Iraq. Raeed, a monk from Qaraqosh, eventually established a temporary monastery in a refugee camp in Erbil, where he has become an inspiration to many, according to a report by World Watch Monitor (WWM). 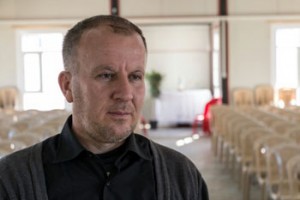 In 2001, Raeed answered a call from God to become a monk and joined four others in a small monastery. But life changed dramatically after the US-led coalition moved into Iraq. He was in a taxi with another monk on his way to Baghdad, when they unexpectedly collided with a US tank. There was a horrible crash and the awful sound of crunching metal as the tank seemed to come out of nowhere and drive over part of the taxi, according to WWM. Tragically, the accident killed the other monk in the car and left Raeed in a coma.

When he emerged from the coma and realized he was the only survivor from the accident, it challenged his faith as never before. He didn’t understand why God would allow such a thing to happen after he dedicated his life to ministry.

“But what happened [in the end] deepened my faith. It brought me back to my calling. I’d promised to obey Jesus, and He said ‘Whoever follows Jesus should not look back,’” he told WWM.

On August 6, 2014, Raeed found himself caught up in the invasion of Qaraqosh by ISIS. On the morning of the invasion, he and several others were gathered for silent prayer. 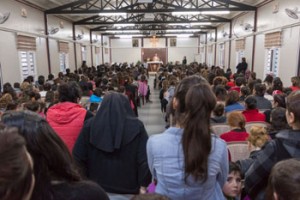 Church in Erbil filled to capacity

Suddenly the sound of honking horns and explosions shattered the silence. He ran to the window and was startled to see cars lining up to evacuate the city. What many feared had come true: ISIS was invading.

Raeed quickly gathered his belongings and prepared to abandon the monastery. He and the other monks found themselves in a long line of traffic as most of the city fled in panic. The drive to Erbil, which under normal conditions would take two hours by car, took them all night.

Over the next several months Erbil became a safe haven for thousands of refugees fleeing ISIS, including many Christians also escaping ISIS atrocities. Raeed found a new calling in crisis atmosphere. He established a monastery in the middle of a refugee camp for Christians, on the outskirts of Erbil.

The temporary church is usually filled to capacity on Sunday mornings, with people standing in the doorway overflowing the service. He never imagined God would place him in a refugee camp to serve, but he has gladly accepted this new calling.

“I don’t have to be anything supernatural,” he told WWM, “I just have to be here with the people in the church because God needs me to be here…It is all about Jesus. Jesus is the core, He is the Rock we build on. And whatever might happen, our Rock will never disappear. He will always be here.”