Several member institutions have set Aug. 31 as the deadline for their decisions

(WNS)–Several institutions plan to leave the Council for Christian Colleges and Universities (CCCU) at the end of August if at that time Eastern Mennonite University (EMU) and Goshen College are still members.

Last month EMU and Goshen announced they would begin hiring faculty and staff in same-sex marriages. The CCCU, a coalition of 183 Christian colleges and universities around the world, initially said it would address the issue at the annual members meeting in January. But on July 28 the CCCU board said it would begin contacting each member president to discuss the matter sooner.

Union University, citing a slow process and general discontent with the CCCU’s direction, this week became the first institution to withdraw from the group.

Others are poised to follow, according to member presidents who spoke to WORLD, including Everett Piper, president of Oklahoma Wesleyan University. Piper said he supports Union’s departure and has continued membership only because he and a handful of presidents agreed to give the council until the end of August to make a decision. 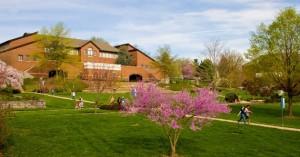 Eastern Mennonite University announced they would begin hiring faculty and staff in same-sex marriages. Photo by Dyoder via Wikimedia.

“I will hold off on announcing our decision until then only because I gave my word to do so,” Piper said in a statement. “The CCCU’s bewildering desire for a drawn-out ‘conversation’ has led everyone (including me) to conclude they think the Church’s engagement in illicit sexual behavior is open for debate. Unfortunately, now, even if they ultimately do the right thing and remove EMU and Goshen from membership, the damage is done.”

Piper is one of about half of CCCU member presidents who have not yet received an official call from a board member. The CCCU may be headed toward moving EMU and Goshen to affiliate status, but Piper said he already has notified the council in writing that affiliate status is “completely unacceptable.”

Piper recounted a conversation he had last month with CCCU president Shirley Hoogstra in which she compared differences on same-sex marriage to disagreement on issues such as baptism or speaking in tongues. She urged respect for “institutional autonomy.”

“You’re not going to convince me that the volitional, behavioral act of sodomy or any other sexual act is on the same moral plane as speaking in tongues, baptism, and other doctrinal disagreements,” Piper told me. “Rather than being committed and convictional, we’re having conversations.”

Hoogstra, in a statement emailed to WORLD, said she supports marriage between one man and one woman and does not equate positions on marriage to doctrinal divides on baptism and speaking in tongues. But those doctrinal issues, she said, “reflect the wide range of theological beliefs and perspectives that have long existed within our association.”

Hoogstra said CCCU members come from 35 denominations, and board members are “not calling the presidents to take a poll on theology. They are calling member presidents because it is a good practice for a board to speak directly with their members and in doing so to assess how EMU and Goshen’s policy change fits within the mission and purpose of the CCCU.”

Bob Andringa, CCCU president from 1994 to 2006, defended Hoogstra and said he was “grateful to see the board choose not to take any action … buying some time to listen made a lot of sense. … If you put yourself in a position that you may not get student aid, you may lose your tax-exempt status, you may lose your property tax exemption—from a trustee standpoint those issues are so much bigger than what association we’re going to be a part of.”

It is unclear whether any institutions have threatened to leave the council if it removes EMU and Goshen from its membership. Messages to several theologically liberal schools went unanswered.

Thomas White, Cedarville University president, and former U.S. Sen. Bill Armstrong, president of Colorado Christian University, told me they will wait to take action until the council issues a final decision. Armstrong said he and his Cabinet have been praying about this looming CCCU issue for more than a year, and he still hopes EMU and Goshen will withdraw from the council on their own.

“This is a counter-offer for the soul of the CCCU,” Armstrong said of the effort to get the group to compromise on same-sex marriage. “It’s the soul of the organization that’s up for grabs.”