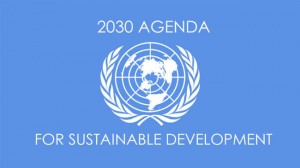 It’s not the Donald J. Trump proposed temporary wall to keep America safe from undocumented refugees that’ should be the biggest worry, but the wall that got the green light recently at the United Nations.

No one will be able to scale the UN wall, which makes all of civilian society walled-in-by-bureaucracy, global citizens.

The sound of the UN prison gate slamming shut, as noiseless as the tree falling in a forest with no one there to hear, won’t initially alarm populations preoccupied with the failing economies of their own nations.

But, after this signing, no country will be allowed the distinction of sovereignty as civil society becomes the UN’s long-touted One World Order, instituted under the cover of Agenda 21/2030’s global warming/climate change accord.

“Four months after nearly 200 nations finally reached an historic deal in Paris to address climate change, more than 160 of them sent representatives on April 22 to sign it in New York, in hopes of getting the deal entered into force well before 2020. (Bloomberg, April 20, 2016)

“United Nations and world leaders are touting the likely historic nature of the April 22 ceremony—they expect to set a record for the number of leaders signing an international agreement on a single day—with a total of 162 nations planning to send representatives to UN headquarters, the UN said April 19.

“They include the U.S., Japan, Australia, Canada, and European nations but also developing countries, including India, Mexico, Brazil and Indonesia.  “According to the UN, only heads of state, heads of government and foreign affairs ministers are generally “empowered” to sign such international agreements.”

Global pooh-bahs will be signing climate accord documents without the approval of their own citizens.

“UN Secretary General Ban Ki-moon said the record gathering, drawing more than 60 heads of state, including French President Francois Hollande, will underscore world commitment to implement the climate accord. He said it would outstrip the previous record of 119 nations that traveled to Jamaica more than 30 years ago to sign the UN Convention on the Law of the Sea. (Bloomberg)

“People say a [world] record exists to be broken,” Ban said April 15 at a World Bank forum. “Well, this time we are going to break [that] record.” “Some may ask about the importance of a signing ceremony, Ban said. But he acknowledged that the outpouring of support will remove any doubts that a global effort to address climate change is underway.”

Part of the pomp and circumstance of the signing ceremony is that the signing took place on Earth Day, 2016 the same day as the beginning of Passover.

The day’s events also included a luncheon in the afternoon termed a ‘High-Level Signature Ceremony of Paris Agreement’, at which former Vice President Al Gore, now chairman of Generation Investment Management and the Climate Reality Project will be keynote speaker.

While the UN has become the unsolicited Armed Forces of rising greenhouse gas emissions, and has recently added ownership of the world’s seas to its booty, cracks in allegiance to its agency, the United Nations Industrial Organization (UNIDO) are starting to show.

Pieter-Henk Schroor, Deputy Permanent Representative—Permanent Mission of the Kingdom of the Netherlands to the United Nations Organizations, has confirmed to Canada Free Press (CFP) that the Dutch government intends to submit a bill to Parliament regarding its withdrawal from UNIDO.

“On behalf of Ambassador Marco Hennis, I would like to inform you as follows: “The Dutch government intends to submit a bill to Parliament regarding the withdrawal from UNIDO. This stems from the fact that our priorities have changed and that there are certain doubts about the effectiveness of the organization. The government is now seeking advice from its highest advisory body. After that, the bill will be discussed in Parliament. Pending the outcome of this discussion, we will not go into detail on the subject matter at this stage.”

This would be a mistake. In recent years, other governments have chosen to withdraw from UNIDO after concluding that the organization is of marginal importance and provides poor value for money. The evidence indicates that the U.S. was correct to withdraw from UNIDO, and there is no compelling reason to reverse that decision.”

“Nations are to resume talks on implementing verification requirements and other issues at negotiations in Bonn, Germany, May 16-26, and high-level UN talks (COP-22) scheduled for Nov. 7-18 in Marrakesh, Morocco.” (Bloomberg)

The high level talks in Marrakesh, Morocco, will take place after the outcome of the 2016 presidential race is known.

Meanwhile, the U.S. will have chosen a new president, while the United Nations has already crowned itself with King of the World status