New Book Debunks Claim that Atheists are Smarter than Believers

(PLYMOUTH, Calif.) Written by a former atheist, “The God Conclusion: Why Smart People Still Believe,” takes exception to the oft-repeated claim that atheists are smarter than religious believers. Author IW Brown makes the case that often those reputed to be the experts in science and academia are further from the truth about God than the typical layman. 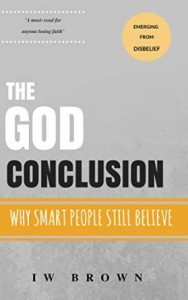 “Far from benefiting from their respective expertise,” Brown explains, “when it comes to the question of God’s existence, contemporary thought leaders tend to be handicapped by the very advantages that set them apart in their fields.” As a result, they tend to approach the question with intellectual and emotional baggage, and without any advantage. Brown suggests that this is especially true of many atheist authors and activists.

“By the time I finished graduate school, I was an avowed atheist,” Brown says. In “The God Conclusion” he explains that this false sense of confidence in the atheist worldview is propagated like never before in higher education and in social media. He continues, “It wasn’t until years later when I had a chance to really consider the arguments, that I realized that atheistic intellectualism was not as advertised!”

Brown also insists that atheism is not a conclusion of science and its practitioners; instead atheism is the presupposition. He says the same is true of the thinking of many atheists. “Unfortunately most of the more vocal atheists turn this fact upside-down. They begin with atheistic assumptions often without realizing it. As a result, the confidence they have in their conclusions is not deserved.”