New laser technology being tested to protect crops from birds, rats and pests as alternative to poison 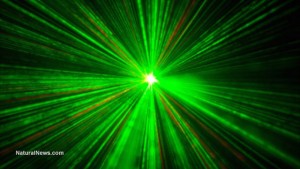 (NaturalNews) It’s not often these days that we get to view rapidly advancing technology in a favorable light, but this is one of those rare occasions where high-tech is an incredibly good thing.

As reported by the BBC, researchers are bringing high-tech to agriculture, as a way to raise crops while protecting the environment.

Specifically, scientists are set to launch a trial funded by the European Commission that utilizes high-power laser light to protect crops from pests, rather than Monsanto’s poisons. Researchers at Liverpool John Moores University are hoping that a “fence” of laser light will scare away rats and other pests, and serve as a viable alternative to environmentally harming poisons.

The EC started testing the technology in Scotland, the Netherlands and Spain in November. It wasn’t clear why these countries were chosen.

The National Farmers’ Union, or NFU, said that the innovation was a potentially important support to the farming industry, after Britain decided in a referendum over the summer to leave the European Union, in an action dubbed “Brexit.”

‘We are looking at wider agricultural uses’

The EC has contributed 1.7 million euros (or about $1.85 million) to the research effort, the BBC reported, citing a similar report in another UK newspaper, The Register.

“The laser has already been produced,” said Dr. Alex Mason, the project coordinator for the Life Laser Fence project, in an interview with the BBC. “It’s a commercial product used in a number of situations – but we are looking at using it in agricultural situations, on a wider range of species.”

Already, lasers are used to keep birds out of crop fields, Mason said, adding that researchers hope the laser – called the Agrilaser Autonomic – will work as well on rats, badgers, rabbits and foxes.

The laser is presently sold as a device to repels birds, which “perceive the approaching laser beam as a physical danger” that they do not want to fly through, the manufacturer says, as cited by the BBC.

Now, researchers are hoping that the device will work just as well on other unwanted pests and animals that destroy crops, eat food that is meant for livestock and spread disease.

Up to now, fields have been protected (if you want to call it that) with poisons and chemicals that can run off during storms and leach into local drinking water systems, as well as harm cattle and other livestock. They also lead to other unintentional victims like birds that actually help the agricultural ecosystems.

Researchers hope that using the laser in trial areas will reduce crop damage by 50 percent, while cutting back on bird exposure to pesticides by as much as 80 percent.

“Continuing support and funding of the agri-tech sector is vital in ensuring British science and innovation can reach more farm businesses,” said Dr. Helen Ferrier, chief science advisor for the NFU. She added that such agriculture technology can help the British farming industry become more competitive, efficient and productive, all while reducing waste, managing volatility and establishing “a fair, transparent and functioning supply chain.”

Bolstering the agriculture technology sector is an “extremely important” endeavor, as Britain will face “potential political and economic changes in the next five to 10 years which could severely impact the farming industry,” ostensibly due to Brexit.

There have been many dire predictions about Brexit that have yet to come true, namely that it would doom Britain financially, though Britain’s economy has actually grown more than anticipated after the Brexit vote. This technology, which will benefit a GMO-averse Europe tremendously, let alone agricultural operations everywhere else, will certainly be a boon to environmentalists and organic farming operations as well.