(WNS)–Lawmakers gathered in front of the U.S. Capitol on Feb. 2 to spotlight new undercover pro-life videos and to reiterate their commitments to defunding Planned Parenthood.

“Oh, we won’t be able to tell you if it’s healthy or the gender,” an unnamed Planned Parenthood worker in Farmington, N.M., told an undercover activist (see video above). “We specialize in abortions. You know, that’s what our ultrasounds are for, to see how far along the, um, patient is.” 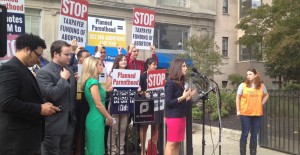 While Planned Parenthood facilities’ websites and voicemails state they provide prenatal care, employees turned away the activists seeking those appointments.

“No Planned Parenthood does prenatal care, hon,” a worker at an Albany, N.Y., facility said.

Live Action said it reached out to 97 separate Planned Parenthood facilities across the country, and only found five willing to check on the health of the child. All the others required the women to schedule an abortion.

“Last fall, Americans went to the polls and rejected Planned Parenthood’s callous extremism. Now it’s time for Congress to do the same,” Black said. “Cecile Richards should consider today’s press conference as a notice that the days of her organization receiving a free ride from taxpayers and a blind eye from Washington are coming to an end.”

Rep. Ann Wagner, R-Mo., co-sponsor of the Conscience Protection Act of 2017, which protects health service providers who refuse to perform abortions, cited polls saying most Americans support the act, as well as a ban for abortion after 20 weeks of gestation.

“Congress has a sincere duty not only to defund abortion but to radically change the conversation around life,” Wagner said. “We will continue to fight until abortion is not only illegal but abortion is unthinkable.”