(WNS)–World champion boxer-turned-politician Manny Pacquiao apologized on social media for saying that people who engage in homosexual acts are “worse than animals,” but not before the remark cost him Nike’s sponsorship.

Pacquiao, a congressman running for senate in the Philippines, made the comment when a Filipino television station asked him about his views on same-sex marriage. 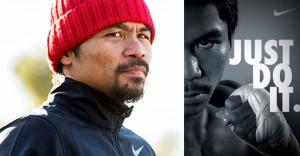 “It’s common sense,” Pacquiao told the TV5 network, speaking in his native language in a video shared online. “Do you see animals mating with the same sex? Animals are better because they can distinguish male from female. If men mate with men and women mate with women, they are worse than animals.”

“Nike strongly opposes discrimination of any kind and has a long history of supporting and standing up for the rights of the LGBT community,” he said. “We no longer have a relationship with Manny Pacquiao.”

The boxer later apologized on social media but said he stood by his beliefs about marriage.

Wearing a white, Nike T-shirt in a photo posted to Instagram, he said: “I’m sorry for hurting people by comparing homosexuals to animals. Please forgive me for those I’ve hurt. I still stand on my belief that I’m against same-sex marriage because of what the Bible says, but I’m not condemning LGBT.”

Pacquiao’s promoter, Bob Arum, said Pacquiao’s comments were intended for an audience in the Philippines, a deeply Catholic country where same-sex marriage is banned.

Greg Scott, vice president of media communications for Alliance Defending Freedom, said Nike has the right to pick its spokespeople. But the company’s actions send a signal “that if you don’t bow to the orthodoxy imposed by corporate America and the government, you should prepare to be silenced and punished.”

Scott said Nike’s decision “highlights the hypocrisy of those who applaud Nike’s exercise of conscience, yet cheer the government when it punishes businesses and religious organizations who don’t hold today’s politically popular views on marriage, family, and life.”

Pacquiao lost to Floyd Mayweather Jr. last year in the most lucrative fight in the history of professional boxing. He reportedly made more than $100 million in the contest. Pacquiao is guaranteed $20 million to fight Timothy Bradley in an April match in Las Vegas. Arum said the boxer could lose some fight sponsors because of his remarks.

Known as one of the Philippines’ most famous people and most popular athlete, Pacquiao became a congressman representing the Sarangani province in 2010. Many speculate he will seek the country’s presidency in 2022.