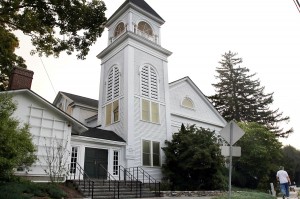 In this Wednesday, Sept. 6, 2017 photo, a pedestrian walks past the Acton Congregational Church in Acton, Mass. The Massachusetts Supreme Judicial Court will hear arguments Thursday whether the town is improperly permitting taxpayer-funded community preservation grants to be used for renovations to the church building. (AP Photo/Bill Sikes)

The City of Acton thinks so and awarded Acton Congregational Church $100,000 under its Community Preservation Act. But a group of taxpayers sued, claiming the grant violates the Massachusetts Constitution’s ban on using public money to benefit religious institutions. The state’s Supreme Judicial Court heard arguments in the case last week and will issue a ruling in the next few months.

Douglas Mishkin, the plaintiffs’ attorney, told justices the church could legitimately apply for the funds if it didn’t have an active congregation. He pointed to Old North Church, one of Boston’s most visited historic sites, as an example of a legitimate preservation fund recipient.

Massachusetts already has funded more than 300 restoration projects involving religious institutions, but the justices questioned whether continuing to do so would spark discrimination claims. Groups with buildings deemed not “validly historic” might protest their lack of state funding.

“Are we getting an excessive entanglement of church and state here?” Justice Scott Kafker asked.

The answer to that question could come from the U.S. Supreme Court, which issued a decision in a similar case earlier this year. In Trinity Lutheran v. Comer, the high court ruled a Missouri church that operates a preschool could not be excluded from a program providing rubber from recycled tires for playground resurfacing. The ruling, hailed by religious liberty advocates, opened the door for some, although not all, public benefits for churches.

Chief Justice John Roberts called the state’s decision to exclude Trinity Lutheran from the grant program “odious to our Constitution.”

In a commentary following the Trinity Lutheran decision, Emilie Kao with The Heritage Foundation noted the federal government didn’t discriminate against churches in offering security grants after 9/11 or against religious schools after mass shooting events at Columbine High School and Sandy Hook Elementary. She also cited asbestos abatement programs open to religious schools as an example of a public benefit available regardless of faith.

“When the government announces competitive programs to the public, including to improve public health, safety, and security, it must allow religious communities to compete on the basis of merit for those benefits,” Kao wrote. “It is an unconstitutional violation of religious freedom to pressure religious communities to renounce their beliefs by threatening to exclude them from competition.”

During last week’s oral arguments in Massachusetts, Nina Pickering-Cook, an attorney for Acton, said the building’s owner shouldn’t matter, since the state’s interest is in preserving historic structures: “The only thing that makes the use of funds here religious is the ownership.”

The Becket Fund for Religious Liberty filed a friend-of-the-court brief in the case, and attorney Joseph Davis noted the plaintiffs went to great lengths to defend their position: “They even attacked church steeples in the town’s skyline as somehow inherently ‘troubling.’ But Acton has had it right all along: Historic church buildings are an important part of our history and they should be preserved for generations to come.”