No Wall Needed! Pelosi Suggests ‘Mowing The Grass’ At Border 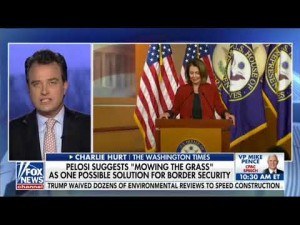 In a recent interview with the Arizona Republic, Rep. Nancy Pelosi (D. Calif.) says lawmakers are concerned a border wall would hurt trade, but mowing grass at the border should be seriously discussed.

“I do know Representatives in the House and Senators in that body, from the border areas have some serious objection to a wall – to a wall,” Pelosi said.

“Because they know how detrimental it can be to the community trade to all the other aspects of a border,” Pelosi added. Funny that she never mentions the word ‘security’ as an aspect of a border.

“Again, let’s sit down and talk this through and see what makes sense -not some commitment to a promise that we are going to build a wall and Mexico is going to pay for it, that’s never going to happen.”

“But let’s talk about where a more serious structure might be necessary, where fencing will do, where mowing the grass – so people can’t be smuggled through the grass – that’s something, levees, technology, personnel.”

Yep. “Mowing the grass,” that is “something,” isn’t it? Certainly worth discussing since it makes “sense,” unlike that border wall “that’s never going to happen.” No wonder Pelosi has been in office for so long, it must be because of all her…uh, interesting ideas.