(WNS)–North Korea threatened to reduce the United States “to ashes” if the Trump administration continues to call for scrutiny of the totalitarian regime’s nuclear capabilities.

North Korea’s state-controlled newspaper The Rodong Sinmun warned on April 20 the United States and its allies “should not mess with us.”

“In the case of our super-mighty preemptive strike being launched, it will completely and immediately wipe out not only U.S. imperialists’ invasion forces in South Korea and its surrounding areas but the U.S. mainland and reduce them to ashes,” it said, according to Reuters.

The comments came after President Donald Trump and his top officials publicly repudiated North Korean leader Kim Jong Un for continuing to escalate his country’s nuclear program. Vice President Mike Pence, nearing the end of a 10-day tour of Asian allies, said this week the “era of strategic patience” with North Korea is over. 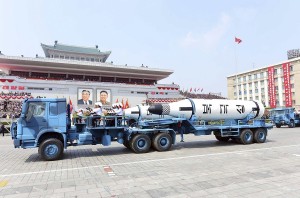 Before Pence’s trip, Trump hinted his administration would adopt a more aggressive strategy toward North Korea. In a tweet last week, Trump said he is confident China will deal with North Korea, but if they don’t the United States and its allies will.

North Korea often makes threats against South Korea, Japan, and even the United States, but this week the rogue nation escalated tension with hostile behavior. First, it organized a display of its missile arsenal during a parade in Pyongyang. Then on Sunday, North Korea launched a failed missile test, a move intended to assess its own military compatibilities and intimidate its enemies.

U.S. Secretary of State Rex Tillerson told reporters in Washington on April 19 that North Korea’s recent behavior is similar to other state sponsors of terrorism and reiterated the administration is appraising its options.

“We’re reviewing all the status of North Korea, both in terms of state sponsorship of terrorism as well as the other ways in which we can bring pressure on the regime in Pyongyang to reengage with us, but reengage with us on a different footing than past talks have been held,” Tillerson said.

According to experts, the United States has few options available when it comes to North Korea.

James Person, a Woodrow Wilson Center fellow on Korean history and public policy, said North Korea’s nuclear ambitions contain a defensive component. The nation’s leaders are paranoid and believe stockpiling nuclear weapons will keep them safe. North Korea thinks the United States will attack any regime it doesn’t like as long as it doesn’t have nuclear capabilities, Person said. Trump’s recent bombing orders in Syria and Afghanistan only reinforced that belief, he added.

Robert Litwak, another Wilson Center scholar who authored a book in February on preventing a North Korean nuclear breakout, predicts tension will continue to increase. He believes North Korea has about 15 nuclear warheads and said by 2020 they could have 100. That would put North Korea’s nuclear program at roughly one-half the size of Great Britain’s.

“But to put this in context, North Korea has a GDP of $16 billion a year,” Litwak said. “That’s roughly the size of Asheville, N.C.”

Because of North Korea’s fear of attack, persuading its leaders to get rid of all nuclear weapons is not on the table, Litwak said. Attacking North Korea is also not an option, and judging by recent comments from Pence and Tillerson, substantive diplomacy with the regime is not in the forecast either, Litwak added. The United States has had a de facto strategy of acquiescing until North Korea reaches its goal of a muscular nuclear program. If that happens, North Korea will have a full-fledged arsenal by 2020, with long-range ballistic missiles capable of reaching U.S. soil, Litwak warned.

Meanwhile, relationships with allies in the region may be fragmenting as well.

Earlier in the week, Trump announced he had deployed a Nimitz-class aircraft carrier, the USS Carl Vinson, toward North Korea amid the growing tension. But on Tuesday, the Navy confirmed it never steered the ship in that direction. While Trump insisted it was on its way toward the peninsula, the aircraft carrier was thousands of miles away, conducting training exercises off the coast of Australia.

South Korea is just weeks away from its presidential election. Hong Joon-pyo, one of the leading candidates told The Wall Street Journal this week this is not a good sign for future relations with the Trump administration.

“What [Trump] said was very important for the national security of South Korea,” he said. “If that was a lie, then during Trump’s term, South Korea will not trust whatever Trump says.”