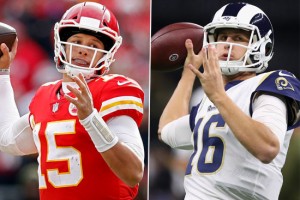 First of all, the game was supposed to be played in Mexico City, but poor field conditions at Azteca Stadium forced the NFL last week to move the game to Los Angeles, as it was a Rams home contest. Secondly, it comes just weeks after a devastating mass shooting in Thousand Oaks, Calif., which is just 10 minutes from the Rams’ training complex, and in the midst of the most destructive wildfire season California has ever seen, with the Camp Fire — the deadliest in state history — still burning.

And thirdly, it featured two of the three best teams in the NFL. Both the Rams and Chiefs entered the game at 9-1, and sparked talk of this being a Super Bowl preview.

The game did not disappoint.

With a combined 105 points and 1,001 yards of total offense, it goes down as an instant classic. The 54-51 win for the Rams is the highest-scoring Monday Night Football game ever, and the third-highest in NFL history. It marks the first time both teams scored 50 points in an NFL contest.

The game-winning score came with 1:49 left to play, when Rams QB Jared Goff hit tight end Gerald Everett down the sideline for a 40-yard touchdown.

It was the second of two fourth-quarter touchdowns for Everett, who describes himself as a “Son of God.”

Leading the way in receiving for the Rams was Brandin Cooks, with 107 yards on eight catches. That’s Cooks’ third straight 100-yard receiving game, and he leads his team with 857 yards on the season.

However, despite all the offensive firepower on Monday, the star of the game might have been a defender. Rams linebacker Samson Ebukam tallied one sack, one interception, one fumble recovery and two defensive touchdowns. And his pass rushing forced Chiefs QB Patrick Mahomes into two late fourth-quarter interceptions, which sealed the victory for L.A.

Ebukam, who was born in Nigeria, is a second-year player out of Eastern Washington who says, “God is the way.” He wasn’t heavily recruited for college, but after a standout career at EWU, he was taken in the fourth round of the 2017 NFL Draft by the Rams.

“All the big schools everyone wants to go to have a lot of distractions,” Ebukam told NBC Sports Northwest. “I was able to focus at Eastern just on my studies and football. Thanks to God, I was able to make it to the league.”

Even the Rams punter got in on the explosives Monday night. Johnny Hekker punted four times, left three inside the 20-yard line, and averaged 55.5 yards per punt, with a long of 68 yards. That bomb came with just over a minute left in the game, after some questionable play calling by the Rams gave the Chiefs another chance. But Hekker’s punt sent Chiefs returner Tyreek Hill into his own end zone, and he returned it only to the 12.

Hekker, who says he plays for “Team Jesus,” last month was a Rams’ Community Player of the Week for his work with Grace City, an organization fighting against human trafficking.

With the big MNF win, the Rams become the first team this season to 10 wins. Despite the loss, the Chiefs’ 9-2 record still leads the AFC — making the Rams and Chiefs the current favorites to reach Super Bowl LIII.