NYC to let the UN run its police force

(NaturalNews) American tradition, values and mores continue to erode thanks to constant pressure by the political left to destroy a culture they see as illegitimate and dangerous to the globe — despite our nation’s appeal to millions around the world and the opportunities we create for ourselves and for others.

Now, the liberals who run New York City are even prepared to cede at least some policing power to “a new global, terror-busting network to try to combat homegrown extremism,” according to a September 29 press statement, The New American reports. 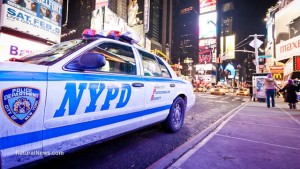 In an announcement made at the United Nations, avowed socialist Mayor Bill DeBlasio declared New York City’s intent to join the UN and the United States Department of Justice in their bid to combat “all forms of violent extremism, whether it’s based in religious, or racial, or nationalistic or ideological intolerance.”

With this, de Blasio has effectively ruled that American patriotism is an “intolerance” he won’t tolerate. Save for 9/11, however, when was the last time we’ve seen a major act of “extremism” in New York City (that hasn’t come from the mayor himself), anyway?

As The New American further reported, the Obama Justice Department is claiming that this new law enforcement partnership program — dubbed “Strong Cities” — is really aimed at inspiring “action on a global scale.”

“The Strong Cities Network will serve as a vital tool to strengthen capacity-building and improve collaboration,” said Attorney General Loretta Lynch. “As we continue to counter a range of domestic and global terror threats, this innovative platform will enable cities to learn from one another, to develop best practices and to build social cohesion and community resilience here at home and around the world.”

Under this initiative, cities around the world would be happily “integrating” their efforts to “safeguard” citizens.

The globalist approach to civilian law enforcement was also praised recently by the mayor of Oslo, Norway.

“To counter violent extremism, we need determined action at all levels of governance,” said Governing Mayor Stian Berger Rosland. “To succeed, we must coordinate our efforts and cooperate across borders. The Strong Cities Network will enable cities across the globe to pool our resources, knowledge and best practices together and thus leave us standing stronger in the fight against one of the greatest threats to modern society.”

Speaking at the launch of the Strong Cities program, Lynch said it would be “run by the Institute for Strategic Dialogue (ISD),” a think tank based in Europe. She also considers conservatives the “enemy,” so to speak. As reported by The New American:

“Americans of a constitutionalist bent, knowing how the Department of Homeland Security looks at patriots, might be interested to read one of the ISD’s primary points of emphasis.

From the group’s 2014 report entitled Old Threat, New Approach: Tackling the Far Right Across Europe: ‘The project will also develop an online tool to provide practical training for practitioners, and will seed a long-term network of experts and practitioners working to counter far-right extremism.’ ”

What is even more disturbing — but wholly predictable — is that the ISD, as a Leftist instrument, made sure to associate “far-right extremism” with firearms. Now that the Justice Department and the European think tank have been given significant control over setting law enforcement policies in the nation’s largest city, gun owners might want to think about voting with their feet before certain gun control policies are enforced after this ISD observation:

“Worryingly, Europol confirms that many members of the extreme right-wing scene have been found in possession of a significant amount of firearms, ammunition.”

Said “extremists” even had the temerity to engage in “target practice.” Gads! We wouldn’t want anyone who owns a gun to actually know how to use it — right?

The Left is coming for our freedom, our heritage, our culture and our values, America. And now, they’ve even signed up their first globalist partner to help close the deal.