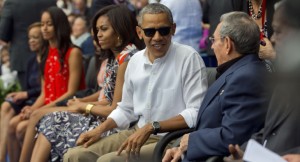 My wife is Cuban. If we’re getting technical, she’s Cuban-Italian, but the point is that her father was a Cuban gentleman who – until the Castro brothers took over – owned a hospital in Havana.  Since he was smart enough to see that Castro spelled trouble, he sent his family to Miami during the run-up to Fidel’s takeover. He stayed behind to try and ride out the storm. Unfortunately, his ability and willingness to care for the poor was seen as a threat to the new regime and he was marked for death once the rebel army took complete control of the country.  He escaped to South America, and eventually made his way to the US. He re-established himself as a doctor and, years later, my wife was born.

He was one of the lucky ones.  In the process, though, he lost everything. He and his family lost the lives they knew. Their home, their hospital, their careers, and their life’s savings were stolen.  …But that was better than facing Raul Castro’s firing squads.

If the Castro Brothers and Che Guevara had their way, my wife’s father would have shared a similar fate. She would never have existed and my child would never have been born. I’m not sharing this story because it’s in any way special or unique. To the contrary; there are millions of people whose lives have been touched by the monstrous actions of these animals.

So you can imagine that when my family sees this….the word “historic” is not the first thing that leaps to mind.

The man with whom Obama is yukking it up is nothing but a cheap mass-murderer whose crimes are too numerous to list. He can throw on a chintzy suit and “do the wave” with a despicable American President, but he can’t make the world forget that his hands are soaked in blood. While Obama sycophants talk of the President’s “legacy,” they ignore the fact that Raul’s is a legacy of brutality, oppression, torture, and mass graves.

But hey, at least he seems to have shown Obama a good time.