In a move that shocked, dismayed and angered many Americans, President Barack Obama made his first official visit to a “peaceful” Islamic mosque on U.S. soil recently. According to WDSU, Obama traveled outside of the D.C. Beltway to pay a visit to the Islamic Society of Baltimore, where he delivered a speech to the gathered attendees.

“Muslim Americans keep us safe,” Obama proclaimed, going on to describe the many roles that some Muslim Americans play in many of our nation’s communities. “They are our police. They are our firefighters. They’re in (the Department of) Homeland Security.” 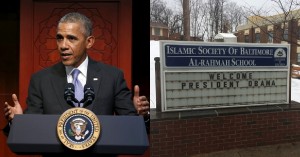 Obama proceeded to reiterate his assertion that Muslims have made great contributions to American society since its inception and slammed Republican presidential candidates like billionaire businessman Donald Trump for their tough rhetoric regarding radical Islamic terrorism.

“We’ve seen an alarming willingness on the part of some Republicans to try to marginalize law-abiding, patriotic Muslim Americans,” claimed White House press secretary Josh Earnest on Tuesday in a preview of the president’s comments at the mosque.

“It’s just offensive to a lot of Americans who recognize that those kinds of cynical political tactics run directly contrary to the values that we hold dear in this country. And I think the president is looking forward to the opportunity to make that point,” Earnest added.

Unfortunately for Obama and Earnest, not all Muslim Americans keep us safe, as evidenced by the horrific events in Chattanooga and San Bernardino, as well as the fact that the FBI has more than 1,000 open investigations into Islamic State group activity in the U.S. Some Muslim Americans are indeed doing their worst to make America rather unsafe.

Also, it is not “cynical political tactics” for Americans to express concern about the very real threat posed by those who hold religious beliefs that “run directly contrary to the values” and culture we embrace in America. Furthermore, very few people are attempting to “marginalize law-abiding, patriotic Muslim Americans” who have embraced America and American culture. Instead, they seek to marginalize and shun those Muslims who flatly reject our way of life and are attempting to usurp it and make it more Islamic.

Finally, the mosque that Obama chose to attend is no squeaky-clean image of pure Americana, but instead has ties to radical Muslims and terrorist-affiliated groups like the Muslim Brotherhood.

Obama’s efforts at blatant pandering to the relatively small population of Muslim Americans proves once again that he is ignorant of the valid concerns shared by many American citizens regarding radical Islam and is blindly naive to the very real danger posed by radicalized jihadists.