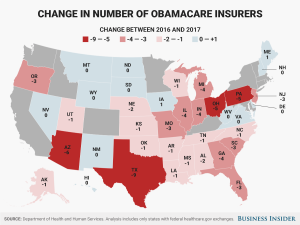 Yet another health insurance company has announced that it will be leaving the ObamaCare exchanges in two states, citing market uncertainty. This is just the latest announcement in a trend that experts claim will ultimately result in the national collapse of ObamaCare.

Anthem Blue Cross and Blue Shield announced that it will be leaving the ObamaCare exchanges in Wisconsin and Indiana, stating that the “volatile” market under ObamaCare is “shrinking” and that the “continual changes and uncertainty in federal operations, rules and guidance, including cost sharing reduction subsidies and the restoration of taxes on fully insured coverage” has created too much uncertainty.

Anthem, like numerous other insurance companies, has indicated it is struggling, largely because not enough young, healthy individuals have signed up for plans to balance the costs of the older, sicker enrollees, the Washington Examiner reports.

“A stable insurance market is dependent on products that create value for consumers through the broad spreading of risk and a known set of conditions upon which rates can be developed,” the company said in a statement. “Today, planning and pricing for ACA-compliant health plans has become increasingly difficult due to a shrinking and deteriorating individual market, as well as continual changes and uncertainty in federal operations, rules and guidance, including cost sharing reduction subsidies and the restoration of taxes on fully insured coverage.”

Those who have signed up for Anthem in these states through the ObamaCare exchange will therefore lose their insurance by the end of 2017.

Earlier this month, Anthem also announced it would be exiting the exchange in Ohio as well, provoking a scathing statement from Ohio’s Insurance Department against the healthcare law.

“Before the Affordable Care Act (ACA) Ohio had a very competitive health insurance market,” Ohio’s Insurance Department said. “New regulations from ACA have driven some companies out of Ohio and made it harder for them to do business, both of which have driven up the cost of health insurance in Ohio.”

“The best long-term fix is to repeal the ACA and replace it with better regulations.”

Anthem spokesman Tony Felts claims its too difficult to price health plans in the exchange because it’s unclear whether the federal government will continue to pay insurance companies for the discounts they’re required to give low-income customers to help offset the costs of the health plans. But to blame subsidy cuts for the implosion of the ObamaCare exchanges ignores the fact that government intervention in healthcare, which started long before the Affordable Care Act, is what caused health care costs to skyrocket in the first place. ObamaCare exacerbated the problem by further increasing demand while restricting the supply of doctors and hospitals.

Health insurance companies are leaving ObamaCare exchanges in droves, and some states and cities will be left without any companies on the exchange as a result. In Iowa, for example, the three remaining healthcare providers — Aetna, Wellmark, and Medica — announced that they would be pulling out.

These companies, many of which lauded the healthcare law at its inception, have cited significant financial losses as the driving force behind their exits. Aetna reported losing $430 million since 2014 from participation in the exchanges. United Healthcare announced it would end its participation in all but a small handful of exchanges in 2017 once it realized it would lose as much as $800 million in 2016. Likewise, Humana, Blue Cross, and Anthem have all reported struggles with plans that were sold on the exchanges, indicating that they were not ready for the increased number of particularly high-risk customers, many of whom have generated far more claims than insurers predicted, though critics of the law have from the beginning forecast such outcomes.

Critics of ObamaCare are pointing to the health insurance companies’ mass exodus from the exchange as proof of the unsustainability of the healthcare system it created, noting that its continual death spiral underscores all of the broken promises made by the Obama administration: The MacIver Institute, a national think tank that advocates for the free market, issued the following statement in response to Anthem’s announcement:

Anthem now joins other major health insurers like UnitedHealth, Aetna, and Humana that have been forced to withdraw from this government-run debacle in order to stop their financial hemorrhaging. President Obama promised the American public that, under Obamacare, we would see competition, lots of choices and lower health care costs. Unfortunately for the American people, President Obama was wrong and taxpayers will be stuck with the tab to fix his problem.

And while these announcements underscore the need for a full repeal of ObamaCare and a restoration of a free market healthcare system, it appears that most of the law will remain intact despite promises made by Republican lawmakers.