Some voices in the United States have repeatedly questioned whether President Barack Obama is really a Christian or not, with the debate often fuelled by the stance taken by the president on various hot button topics that go against deep-rooted Christian values and beliefs.

With Pope Francis currently in the midst of his first visit to the United States, President Obama’s faith has once again been called into question by some, who have been surprised at the president’s guest list to hear Pope Francis speak this week.

The Washington Post has questioned the president’s actions in an editorial that appeared this week, which questioned Obama’s inclusion of “transgender activists, the first openly gay Episcopal bishop, and a nun who criticises church policies on abortion and euthanasia” in the White House guest list for Pope Francis.

The Washington Post was referring to the inclusion in the White House guest list of Sister Simone Campbell of NETWORK, who led the liberal “nuns on the bus” tour and dissented from Catholic doctrine by supporting abortion; Bishop Vicky Gene Robinson, the first openly gay Episcopal Church bishop of New Hampshire, who married, then later divorced, the man he left his wife to be with; Mateo Williamson, the former co-chair of the Transgender Caucus; and blogger Aaron Ledesma, of the website The Gay Catholic.

“What struck us as we read about this small controversy is the contrast between the administration’s apparent decision to risk a bit of rudeness in the case of the pope and its overwhelming deference to foreign dictators when similar issues arise,” the Washington Post wrote. “When Secretary of State John F. Kerry traveled to Havana to reopen the US Embassy recently, he painstakingly excluded from the guest list any democrat, dissident or member of civil society who might offend the Castro brothers.”

“And when Chinese President Xi Jinping comes to the White House next week, shortly after the pope leaves town, it’s a safe bet that he won’t have to risk being photographed with anyone of whom he disapproves,” the paper’s editorial said. “Chen Guangcheng, the courageous blind lawyer, for example, lives nearby in exile, but he probably won’t be at the state dinner. Neither will Falun Gong activists, democracy advocates or anyone else who might, well, give offense.”

According to the Wall Street Journal, a Vatican official noted that “the presence of these [controversial] figures [in the White House guest list for the pope] is especially irritating.”

Some have defended the president, highlighting the fact that the White House has also included a number of conservative evangelicals to meet the Pope, such as the Rev. Joel Hunter, an evangelical megachurch pastor from Florida who is a confidant of Obama on spiritual matters; the Rev. Leith Anderson, president of the National Association of Evangelicals (NAE), which represents about 40 conservative Christian denominations; and the Rev. Samuel Rodriguez, president of the National Hispanic Christian Leadership Conference.

However, observers noted that the White House did not invite any person representing the pro-life movement to greet the head of the Roman Catholic Church, the world’s largest pro-life organisation, according to Rob Schwarzwalder of Charisma News.

In its defence, the Obama administration merely said it tried to include people of every background in the list of people to welcome the pope.

Schwarzwalder said Obama’s “willingness to affront the leader of the world’s largest Christian tradition is an embarrassment to our country.”

“Insulting foreign friends while placating foreign adversaries strikes one as an unusual approach to advancing America’s national security and vital interests. Sadly, this Administration seems eager to do just that,” Schwarzwalder added. 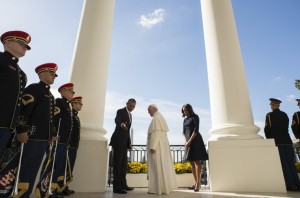 Caption: Reuters/ US President Barack Obama points the way for Pope Francis after they and first lady Michelle Obama posed on a White House balcony during a welcome ceremony for the pontiff on Sept. 23, 2015.