[Faithit.com] You’ve probably heard the phrase “Be kind, for everyone is fighting a battle you know nothing about.”

Taylor Fisher and her husband Chris experienced this firsthand on their trip to Disney World earlier this month. She shared the moment on Facebook saying:

“I have debated whether or not to share this primarily because I don’t think it’s possible to find the words eloquent enough to describe the profound impact it had on my life and also because, though we were surrounded by thousands of others, the experience seemed so intimate it almost feels too personal to share.”

Taylor explains that she and Chris were visiting EPCOT with their young son, Oliver. After eating dinner in Norway, they headed toward France and the Eiffel Tower. 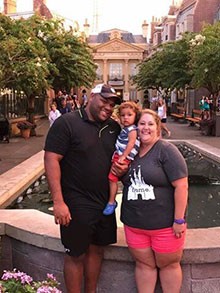 “While in France a sweet couple stopped to take our picture in front of the Eiffel Tower. They were very patient as Oliver did not cooperate during the picture taking and finally got a decent one. We said, ‘thank you’ and went on our way.”

But a few minutes later, the man who had just taken the Fisher’s photo returned and asked to speak to them for a minute. Assuring them he wasn’t “creepy,” the man introduced himself as Scott, and his wife as Sally. They had three kids who were out and about with their grandparents for the night while the couple celebrated the first birthday of their fourth son, Duke. He’d passed away just months before.

That day—July 1—was Duke’s birthday, and Scott and Sally were overwhelmed with how much Oliver reminded them of their own son.

That’s when the couple presented an interesting request: They asked if they could take Oliver on a shopping spree at the Mouse Gears gift shop, in honor of baby Duke. Taylor says she felt the Peace of the Lord all over the situation, and agreed.

“As a parent, and looking back on the moment, you would never think to just give your child over to perfect strangers, but in that moment, I was so overwhelmed with peace, a peace that only God can provide, that I handed my little boy over and watched as he held the hands of these two people whom my heart suddenly felt so connected with. Chris and I of course followed behind (we’re not that crazy).”

Sally held Oliver’s hand as they walked through the store to some of the toys. Taylor replays the moments as snapshots she was lucky enough to witness:

“I watched her eyes turn from sadness to joy every time Oliver smiled at her. I watched the sorrow turn to hope each time Oliver picked up a toy and hugged her thank you. As Oliver reached “up, up” I watched Scott’s pain start to fade as he held Oliver and wept into his head. Through an act of their own generosity, I witnessed a couple begin to heal from the grief and ache of losing something so dear.” (Photo Credit: Facebook via Faithit.com) 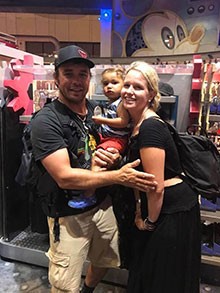 It was in the moments when their time together came to a close that Taylor was overwhelmed by the incredible ways God is in control.

“After they bought him way too many toys, we all stopped in the middle of the store. We held each other and we prayed. God’s presence was so real and we worshiped and praised Him for His ultimate design, for it was only God who could have brought us together. As we left Sally told us that she prayed that God would send her closure and tonight was her gift from God. After tonight she could start to move on. To heal.”

Though Taylor was apprehensive about sharing the experience, she says it’s an incredible reminder that there are no coincidences, just God. And she couldn’t be more thankful for that.

“Y’all. This is God. He is so real. Only He can put the right people in the right place at the right time so He can heal a broken heart. He designed it this way. Had we stopped in one more shop, taken one more picture, went a different direction, watched the parade a little longer, we would have missed it. But we didn’t because God was in control. And that, my friends, makes life a whole lot more meaningful.”