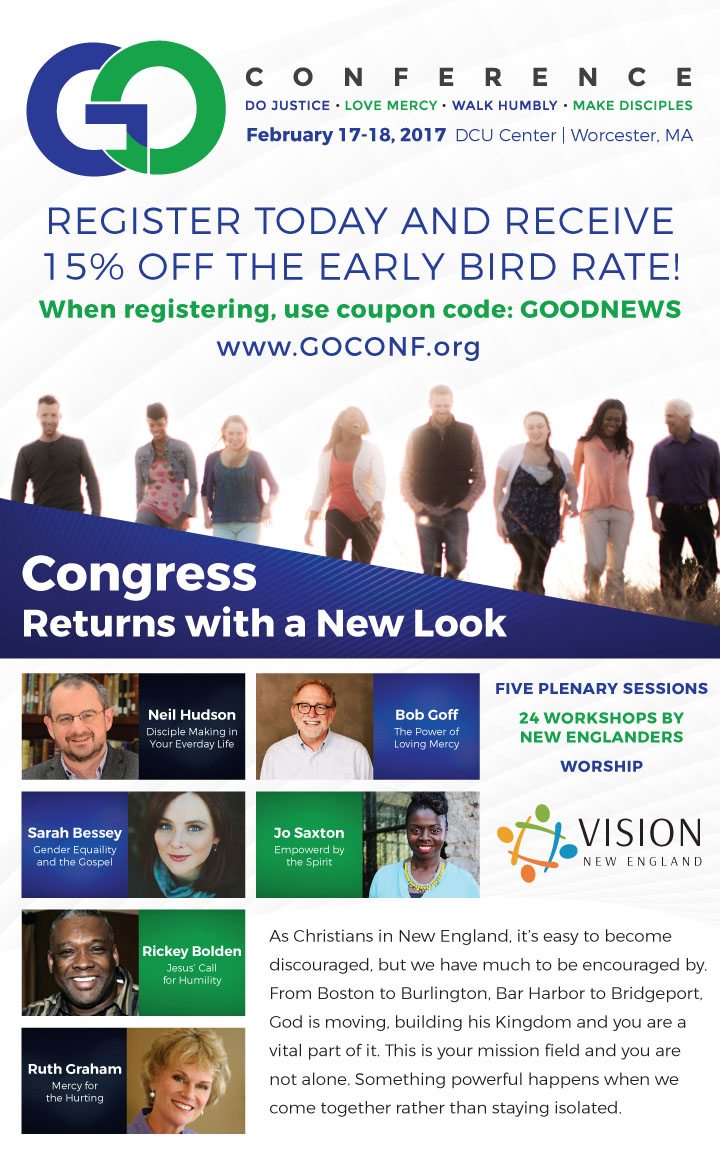 The race is on for the second annual Go Conference, slated for Feb. 17-18 at the Worcester DCU Center, in Massachusetts.  Worship. Workshops. Winsome, Word-centered messages with strategies warp and woof to working the harvest fields at such a time as this.

“We want to be a part of the solution,” said Ryan Howell, President, Vision New England. “How are Christians participating in this work of building and creating a better, stronger, healthier community – not alone as Christians but with others?”

Go is a reincarnation of Congress, an annual conference organized and hosted by Vision New England until it was last offered in 2006. While many hallmarks remain the same, the goal of this Go conference goes beyond educating and edifying people for a weekend. It also seeks to equip and encourage to mindful, grace-filled action – not just for a season, but also for life.

Vision New England’s hope is those attending the conference will put into practice the lessons they’ve learned – and do so with enthusiasm.

“We want people to get more than one-time warm fuzzies from the messages and networking with people they know,” said Michael Froning, Vice President, Operations, Vision New England. Once equipped, those attending can become catalysts for changing their neighborhoods and communities by acting on what they’ve learned.

Take Martin Beninson who attended the Go conference in May in Hartford, Conn. Beninson, who hailed from Danbury, Conn., at the time, gained a greater awareness of his Christianity and has tried to be more loving and gracious to others he meets.

“It’s hard sometimes to act appropriately when things are happening or people are not very receiving of you,” he said. “But you want to show the world what Christianity is. You can’t make disciples without that. It’s got to be in your soul.”

Looking at the post-modern culture of today, the idea that one can just go and have a voice to proselytize without actions backing the words comes as a hollow message to those we would have hear, Froning said. 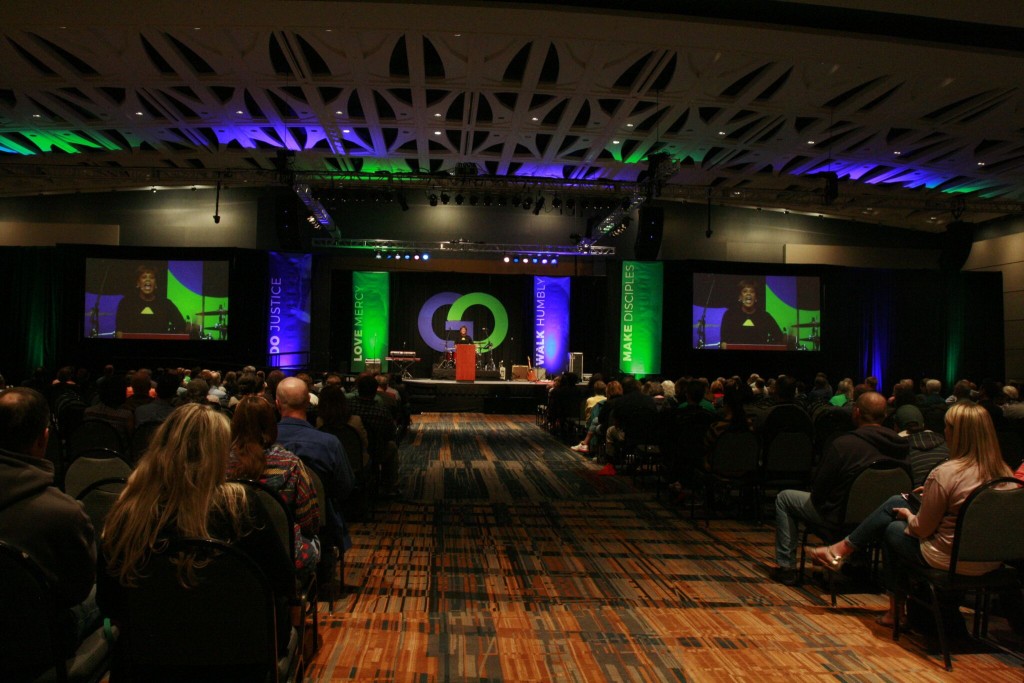 “It’s a lot harder,” he said. “The New England region is skeptical toward that. For us to have a voice and be able to share our faith, we need to be seen as relevant.”

With five of the six New England states ranked least religious in America, Vision New England has invited keynote speakers to address how Christians here can build a springboard from which to share their faith.

They and speakers for 24 workshops will focus on core strategies outlined in the two Scripture verses driving the conference: Micah 6:8 and the Great Commission, in Matt. 28:19-20:

Howell calls it “compassionate evangelicalism,” giving teeth to the theoretical.  “We want this to be transformational, not transactional, where people come not just to hear a certain speaker but be challenged,” he said. “The goal is to be more like Jesus. The Bible calls us to be active. The historical evangelical is called to be active in building the kingdom.”

The Go conference kicks off with a special celebration and worship event, the night of Feb. 17.  Five plenary sessions will feature nationally acclaimed speakers presenting these big-picture perspectives:

While they will offer birds-eye views of the overarching themes, 24 interactive workshops created by New Englanders for New Englanders will drill down into particulars relevant to the region. The workshops will unveil how ministry in each of these areas of focus might or does look in our own backyard.

“The workshops were wonderful for me,” said Beninson, who is studying for a bachelor’s degree in Christian ministry with a minor in ethics through Liberty University online. “They tied into the main theory of the conference.”

The first session – Love Mercy – grabbed Beninson’s attention. “The whole idea is to try to be good, be careful with people and how you react in terms of what other people do,” he said.

Another theme resonating came from Session II, on walking humbly: the need to be patient with others, try to do the right thing and avoid taking credit for work that no one else but God could have done. “It’s not really me,” he said. “It’s about God.”

Session III, “Do Justice,” stood out as well. It had a lot of meat, he said. “You have to be kind to people,” he said. “In this world today, it’s horrible the way people treat each other and the things they’re doing. We need to be big on having grace, treating the world like we’re supposed to – to be a good Christian, it’s about having grace.”

“You need to have some patience and try to be a good person,” he said. “You may do some things you think are great, but it’s not something you can take credit for – it’s really all for God.”

He mentioned he also was inspired by presentations by the Rev. Liz Walker, who spoke during the Make Disciples session, and Brian Stevenson, Equal Justice Initiative founder and executive director. “The thing I like about all of them is they weren’t talking about 90 years ago,” he said. “They were talking about today – what’s happening today.”

Those familiar with Congress might see some similarities to Vision New England’s past conferences.  In addition to keynote and breakout sessions, they will recognize the large-ministry and resource Expo. There’s just about something for everyone, large and small.

The Expo was one of the first things Beninson highlighted in his review of the conference.  “It had a lot of vendors from different places, and you got an idea of what everybody is doing and what they are looking for today,” he said. 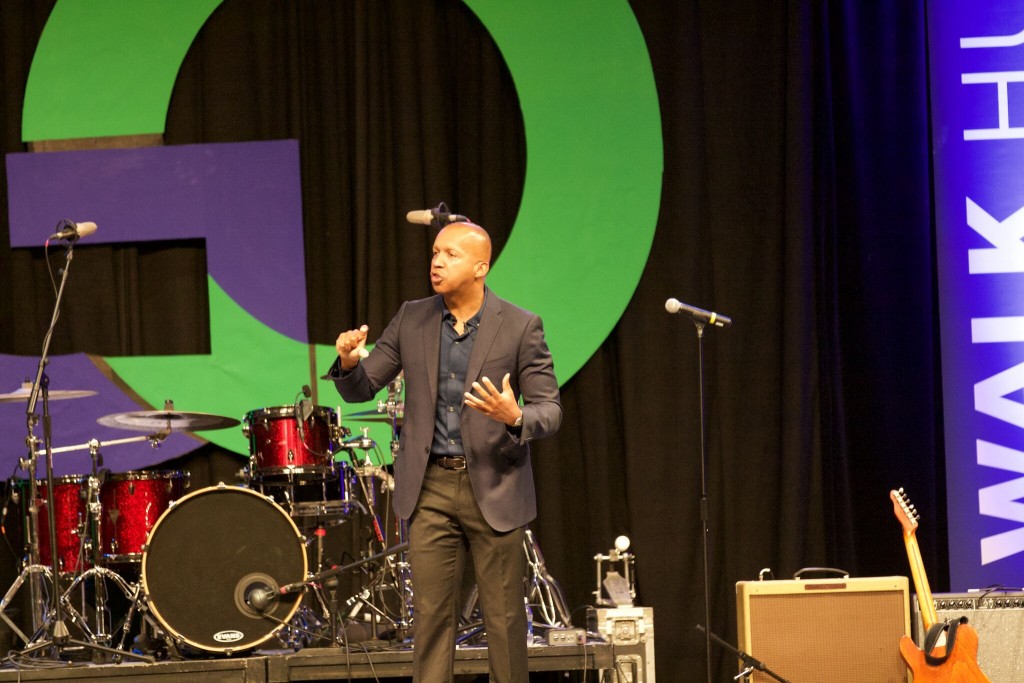 He also noted he enjoyed the music offered by Unspoken, the worship band that played at the conference. “I have the CD from May still in the CD player of my car,” Beninson said.

The February Go conference builds on the first, and organizers are hoping to grow the number of those who attend, they said.  “From a quality standpoint, we thought it went excellent,” Howell said. “We really hit our target on staying focused on these four key areas and to have people not only be encouraged but also challenged. The speakers did a great job in staying on topic.”

While numbers were down from their hopes, they learned some key lessons – most important, Vision New England rediscovered the reason they had traditionally offered Congress in February, where there’s less competition for people’s

There also were some spin-offs from the May conference – one, a summit in direct response to one of the keynote speakers, who touched on justice issues within the prison-care system.  After that talk, Vision New England created a summit where people from different backgrounds spoke about the injustices in the prison-care system and how to provide resources to prisoners coming out of incarceration.

The Go! Conference is one of a handful offered in the past year to help awaken the Church in New England to action.

In addition to the May Go! Conference, Franklin Graham came, in August, to the Massachusetts and Rhode Island state capitols to speak as part of his 50-state Decision America tour.

In October, Luis Palau visited with several hundred evangelically minded people as part of the Together! Conference, held in Providence.

Beninson, who moved to New Hampshire the week before Thanksgiving, won’t let the distance keep him away and is set to go.

“I’m already signed up for the Go conference in Worcester,” he said. “It looks like it’s going to be another good opportunity!”