(WNS)–This week in Lahore, Pakistan, a court freed a Muslim man charged with double murder after he forgave himself and his two accomplices. Leveraging a longtime Islamic tradition, Faqueer Muhammad claimed family pardon and legal “forgiveness” for himself, along with his son and nephew, for the so-called “honor” killing of his daughter and her lover.

“The deceased, Kiran Bibi, was my real daughter,” Muhammad said in court. “I have forgiven the accused persons in the name of Almighty Allah, and have no objection to their acquittal. I also waive my right of [retribution] and [blood money].” 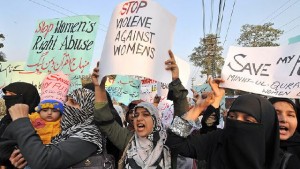 Muhammad’s self-acquittal came days after Pakistan enacted the Anti-Honor Killing Law, which prohibits the use of family pardon to absolve criminal punishment. But since Muhammad’s crime took place in 2014, the law does not apply to his case, according to the court in Lahore.

“There is no chance of conviction at all,” the judge assured Muhammad, demonstrating the difficulty of changing attitudes in the deeply conservative Islamic society.

After a year of parliamentary bickering and verbiage tinkering, Pakistani lawmakers finally passed the bill to toughen penalties for men who murder women—often their wives or sisters—in the name of family honor.

“Honor killings are a cancer in our society. This law is being presented against this cancer,” said Naveed Qamar, a member of the opposition Pakistan People’s Party.

In Pakistani society, family honor is closely linked—if not synonymous—with a woman’s perceived virtue. If a Muslim woman is suspected of indecent behavior, which can include offenses such as marrying a Christian, committing adultery, or sitting down too near another man, Islamic tradition allows for her murder. Under Sharia law, the killer may be “forgiven” and acquitted of criminal punishment.

Last year alone, about 1,100 Pakistani women and girls were victims of honor killings, according to the country’s independent Human Rights Commission. Like rape, honor crimes are woefully underreported, and the actual number likely is much higher.

“It may not change much overnight, but [the Anti-Honor Killing Law] is certainly a step in the right direction,” wrote Pakistani activist Sharmeen Obaid.

Obaid’s Oscar-winning film, A Girl in the River: The Price of Forgiveness, which tells the story of an honor crime survivor, caught the eye of Prime Minister Nawaz Sharif, perhaps sparking the new bill’s parliamentary success.

The law still allows for Sharia-styled forgiveness—but only if the killer receives a death sentence. If pardoned by the slain woman’s family, the convicted honor killer would escape execution and serve a 25-year prison sentence. Pakistani lawmakers added the forgiveness provision as a concession to Islamic parties, who complained the law granted women too much freedom.

“They are trying to impose Western culture over here,” Senator Hafiz Hamdullah told the Associated Press. “We will not allow [it]. We will impose the law that our holy Quran and Sunnah [tradition] say.”

Hardline Muslims also expressed frustration that the government refused to consult the conservative Islamic Ideology Council before incorporating the new policy into national law. The group recently criticized a domestic abuse reporting law as “un-Islamic,” and leaked a statement saying Pakistani men have religious license to “lightly beat” their wives.