Parents: Embrace “The Homeschool Awakening” – Your Kids Are Worth It! 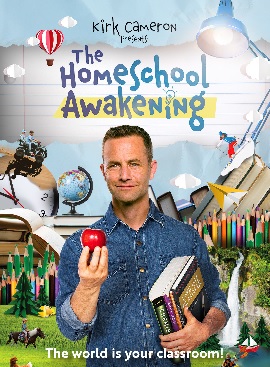 This week, I attended the second and final screening of the world premiere of the inspiring, upbeat, and positive new documentary The Homeschool Awakening, by award-winning actor Kirk Cameron (Growing Pains; Left Behind series). Despite the competition of the multi-billion-dollar, box-office blockbuster Jurassic World playing next door, shaking the walls with the thundering sounds of man-made dinos running amok, Homeschool was its own refreshing escape from what feels like the daily din of the world in which we live these days.

The movie was stunningly well attended by an enthusiastic, engaged, family-friendly crowd, which surprised me considering I was in a theater in the suburb of ruined, way “woke,” and radical Seattle. A few seats from where I sat was a busy toddler who at one point calmed herself as montages on the big screen flashed before her, of kids of all ages and sizes interacting with their moms and dads and participating in normal fun activities such as story time, cooking, outdoor games, and yes, even math, science, and geography. The child’s laughter was contagious, as she pointed to and repeated the words and actions she recognized. Slowly I began to feel at ease in a theater with a talkative two-year-old, as such an environment felt fitting — as the film itself is all about family.

To paraphrase one father featured in the film: Wealth is not about the material things we own; real wealth is found in the family, and parents must take seriously their responsibility as both educator and caretaker. As the Bible teaches in Proverbs 22:6, “Parents, train a child in the way he should go, so that even when he is old, he will not depart from it.”

Parent-led Education — It’s Yours to Shape

Cameron, the teenage heartthrob-turned-American activist — most widely known for his role as Mike Seaver in the popular 1980-90s TV sitcom Growing Pains — stars in the film, along with his family, and is also the film’s executive producer. He explains well the overarching theme of the film in a few words in an interview with The Epoch Times’ “American Thought Leaders” host Jan Jekielek:

“God gave your children to you as mom and dad, not to the federal government, and you get to decide what is the best way to support, encourage, and educate your kids.”

Cameron and other presenters in the film, such as author and journalist Alex Newman (founder of Public School Exit and co-author of Crimes of the Educators: How Utopians Are Using Government Schools to Destroy America’s Children) and Dr. Kathy Koch (founder of Celebrate Kids, Inc. and author of the book 8 Great Smarts), remind viewers that for hundreds of years early education in America was based in the home and was not in the hands of the federal government.

“[Education] was a private thing,” Cameron told Jekielek. “It certainly wasn’t funded by the government until later, and parents took their responsibility as a sacred duty to shape the hearts and minds of their children. And they didn’t do it alone; they were doing it in community with other families, and they saw their whole world as their classroom.”

One family in the film with a daughter named Abby who has Down syndrome explained that a public-school aide told them that Abby could not play in the same way as the other children, owing to her disability. The family grappled with whether to take their daughter out of the school.

“I wanted Abby to be in an environment where she would be allowed to try things and not told that she couldn’t do something because she was different,” said Abby’s mother. Added Abby’s father: “If we put half as much time into homeschooling our child as we’re putting into trying to [write these articles and find out what was legal], all that energy we were wasting in that direction, I thought she’d be better off. We didn’t have to be a special-needs teacher, we only have to be a teacher to our daughter.”

Being a teacher to four children, another mom in the film noted that “every single school day starts with prayer and a devotional.” Some of her children are more hands on, she explained, others less so but moving in that direction. “Each kid has his or her own crate … with whatever we’re working on that week. Nothing more. Only the workbooks we’re working on that week. Our school looks different every day,” she said.

In a touching scene, Chloe thanked her mother for all she has done for her: “I am encouraged by what she does for me because I know she doesn’t have to do this for me…. She made sure I had everything I needed.” Chloe is crying as she looks at her mom and says, “she has no idea, she has no idea.” 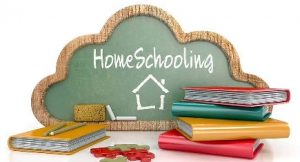 A Day in the Life of Homeschooling Families

“Homeschooling was never on our radar, but it all of a sudden sounded really nice,” said one mom of two who is also a small-business owner. “Our eldest was in private school, and I knew in my heart if he stayed in school it was going to be an uphill battle to preserve who he was. I didn’t feel like I had the time. I really felt clearly that God said I will create time where there is no time.”

Another mom, who admitted she is not a morning person, chuckled as she remarked that “when all of [our] friends were chasing the bus, we would all pile into bed and read a book and giggle at the fact that everybody else was awake and onto the grind and here we are all cuddled up doing a read-aloud and having a cup of coffee in our jammies.”

Yet another mother, whose father was a senator and passed a bill that if a teacher was assigning explicit material, the parents should be notified, described how her family was flooded with emails from teachers telling her to “get out of the way: Your child’s education is not your business; we have the degrees and the expertise.”

Many of these parents who once had their children in public schools have had to “unpublic school themselves” and learn to teach their kids how to learn for themselves. While all admit the process has been challenging, all also said it has been the greatest gift they were given.

“What’s the worst thing that could happen,” said one parent to his wife while discussing the option of home-based learning. Their son, Nathanial, had been repeatedly bullied at school, but once at home he wasn’t dealing with those same pressures. “We were no longer chained to the school schedule,” said Nathanial’s mom. “I was worried about losing freedom but what I discovered was that the freedom we had was so worth this small sacrifice. [That sacrifice] was to teach the kids. Now 12 years later, I realize it wasn’t a sacrifice; it was a total gift.”

In one compelling scene, a college dean of admissions explains that, if test scores are equal, they prefer homeschooled kids because they have such a well-roundedness about them. “Their socialization is exceptional. They’re used to being around and working with adults and children! They’re initiative-takers, they’re out of the box thinkers, they’re pioneer families, and we want more like that.”

As the parents of six children, four of whom were adopted, Cameron and his wife, Chelsea, speak candidly about their own decision to homeschool, which they did not make until their children had completed six years of private schooling.

In a film that features 17 families from all backgrounds, races, colors, and creeds — some kids work on farms but live in the city; another is a pilot at age 14 — the message Cameron sends is that homeschooling can offer a “hands-on workshop where you get to learn together from other families through curriculums that are built by education experts…. You can do it in a tailor-made way that doesn’t undermine your faith and values, and it doesn’t replace family time. It actually enhances those things.”

With the meteoric rise of the homeschool movement, a fast-growing trend that shows no signs of slowing, the number of American families opting for a home-based education for their children has increased a stunning 63 percent over the 2020-21 school year, and the percentage continues to soar. There are dozens of homeschool co-ops and networks popping up across the nation, as well as homeschool conventions (which Cameron discusses in the film and which can be found on the Homeschool Awakening website).

To critics of homeschooling who question whether it is possible for the single mom or dad to homeschool because it is too costly or too time-consuming, Cameron said, “Yes, [it is possible]…. And there has been an explosion, and a return to these educational principles of parents being in the leadership position, not the federal government.”

Cameron continued, “Homeschooling is becoming so popular and so many people are there to help that homeschooling has become very, very affordable. And you’re not doing this alone. You have the support of a vast community of millions of families who are doing it successfully.”

“Instead of saying I can’t afford to do anything but the status quo,” urged Cameron, “ask yourself can I afford not to look into something that might be better for my kids and really help them succeed and flourish? As a parent, no one is going to love them and care for them as much as I do, and I need to take the lead in discovering where my priorities are and how to find a way to do the things that are important to me.”