SHELBY, N.C. (BP) – North Carolina pastor Rit Varriale wants to see churches fly the Christian flag above the American flag as a biblical statement, reversing flag etiquette that calls for the American flag to be flown in the prominent position. 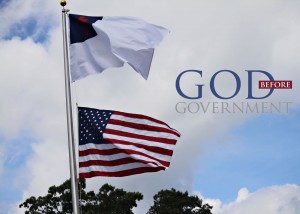 Varriale, as senior pastor of Elizabeth Baptist Church in Shelby, N.C., said the church installed its first-ever flagpole in order to raise the two flags in a special ceremony after morning worship on Sunday (July 5) in which the Christian flag was raised in the higher position — which prompted interviews by Charlotte-area NBC, CBS and Fox affiliates.

“If you stop and think about it, [flag etiquette] is inconsistent with what the Bible teaches us,” Varriale said. “We are first and foremost Christians who are called to serve the living God.”

Varriale said the national motto of the United States, “In God we trust,” signed into law in 1956 by President Dwight D. Eisenhower, acknowledges there is a Divine Being who is the greatest authority and to whom each person is accountable.

“So from a Christian perspective, our flag etiquette is completely improper,” he said. “We should be flying the Christian flag above the American flag” as a demonstration that Christians will respect and obey the federal government up to the point that the government asks something that is inconsistent with what God has called His people to do.

Varriale is among an increasing number of pastors who believe government is trying to coerce Christians to live in ways that violate Scripture. “They use different justifications for it, like anti-discrimination laws,” he said. “Christians are being coerced to serve the government before they serve God. That is something we can’t stand for.” Varriale is an Army veteran as a Ranger and officer with the 82nd Airborne Division and graduate of The Citadel, Campbell University Divinity School, Duke Divinity School and Princeton Theological Seminary.

Elizabeth Baptist Church is not alone. Varriale noticed a small African American congregation a few miles down the road that was flying the Christian flag on top of the American flag. “I asked the pastor about this and he shared the very sentiments that I have. We have a common bond on this,” Varriale said. “With all due respect, we honor our government, and we’re very proud to be Americans, but we must honor God before human authority.”

The July 5 worship service took patriotic note of the nation’s independence and freedom, but it also addressed “the fact that with our freedom, the greatest thing we can do is to stand up for God’s church and the principles of religious liberty,” the pastor said. In raising the flags after the service, he said, “We’re just doing this to honor our Lord and as a testimony to our community that serving God is our first priority.”

The Sunday morning message was titled, “God Before Government,” which also is the name of the church’s newly launched website www.GodBeforeGovernment.org and Facebook page.

Varriale said he hopes other churches will join the public witness, including sending photos of their flag 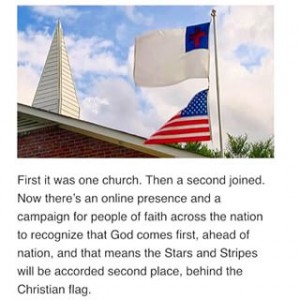 Varriale said the clash of religious rights and minority/individual rights particularly in the lesbian, gay, bisexual and transgender (LGBT) agenda and the large number of lawsuits against Christian businesses should cause Christians to ask, “Where did we start going wrong, and how did we come to this place?”

“In large part we started going wrong when we stopped standing up for things that are inherently part of the Christian life, like prayer,” the pastor said. “The admonition from the government to stop praying in the public school system was packaged under the notion of rights — the rights of the individual.” The minority didn’t want to pray and felt they should not be asked to pray in a government institution, Varriale said. However, the public school is not only a government institution, he said, but a place that serves the people of the community. “Any institution should be able to reflect the values of the people who live there,” he said.

“Now, stepping back and looking at the issue of prayer in school from a biblical perspective, the church made an incredible mistake by listening to and appeasing the government and refusing to pray with our children,” he said.

“Now we are reaping what we have sown by not standing up for the things we believe in.”

Varriale said the same Scripture that teaches respect for authority, as in Romans 13:1-3, also invites judgment on the church. “When the authority asks you or commands you to do something that is against our Christian values — that is, something God tells you not to do, or God specifically commands you to do — then the responsibility of Christians is civil disobedience. You see it in the Old Testament — as in Daniel, Shadrach, Meshach and Abednego — or in the New Testament in the lives of the apostles.”

LGBT leaders have practiced civil disobedience, Varriale noted. “That is the level of commitment they have, and that’s why they are winning. The church is going to have to be as committed to the lordship of Jesus Christ as the LGBT community has been committed to their agenda.

“If the church doesn’t stand up and articulate that we serve God first, we are setting ourselves up for failure, because the very next step for government coercion,” he said, noting the controversial attempt by the city of Houston to subpoena sermons by five local pastors last year, “will be the pulpit.”