The Alliance Defending Freedom’s invitation to pastors to exercise their First Amendment rights by speaking truth to power — and offering political advice and counsel to their flocks from their pulpits — has taken on a life of its own. Sunday, October 7 was designated by the ADF as Pulpit Freedom Sunday, during which it encouraged pastors to “use [their] sermon[s] to apply Scripture to the stated positions of [political] candidates.”

It noted that a “pastor has a constitutional right to apply Scripture and Church teaching to every area of life, including the area of candidates and elections.”

The ADF is clearly hoping that these pokes in the eye of the IRS will provoke a response, yet to date there has not been a single one. 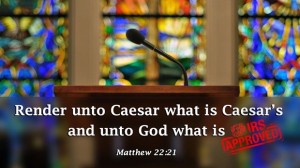 What has happened instead is that pastors, seeing their brethren speaking the truth from Scripture without incident or difficulty or challenge from the IRS, are turning every Sunday into Pulpit Freedom Sunday.

The effort began in 2008 as the ADF, supported by the pro-bono efforts of hundreds of freelance attorneys around the country hungry for the chance to defend pastors against IRS lawsuits, encouraged them to speak on political issues from their pulpits. They hunger for the chance to take on the IRS and ultimately declare the Johnson Amendment unconstitutional. Said the ADF:

Alliance Defending Freedom firmly believes that the Johnson Amendment is unconstitutional as applied to a pastor’s sermon from the pulpit and we have been eagerly waiting for the opportunity to end the injustice [by] taking it to court.

The Johnson Amendment, adopted in 1954 by the U.S. Congress without debate, declares that a church engaging in political speech or activity will lose its cherished tax-exempt status under Section 501(c)(3). Notes the ADF:

The amendment violates the Establishment Clause by requiring the government to excessively and pervasively monitor the speech of churches to ensure they are not transgressing the restriction in the amendment….

The amendment violates the Free Speech Clause because it requires the government to discriminate against speech based solely on the content of the speech….

The amendment also violates the Free Speech Clause by conditioning the receipt of a tax exemption on refraining from certain speech. Put simply, if a church wants the tax exemption, it cannot speak on any and all issues addressed by Scripture….

When Pastor Jim Garlow preached to his flock at the Skyline Church east of San Diego on Pulpit Freedom Sunday, he inveighed against Republican Carl DeMaio, running for the House of Representatives, because, he said,

I want babies protected from the womb. I want marriage defined as one man, one woman. You can’t have the advancing of the radical homosexual agenda and religious liberty at the same time. One will win, one will lose.

And then he added: “If a member of the IRS gets this sermon, or is listening…sue me!”

As of this writing he has heard nothing from the IRS.

These examples have encouraged other pastors around the country to express themselves politically as well. Rev. Mark Cowart, senior pastor at the Church For All Nations located in Colorado Springs, Colorado, said on Sunday, October 19:

[Republican candidate Bob] Beauprez is against more gun control, does not support abortion and he does protect the man-woman marriage — [he’s] the one I’m voting for.

Rev. Kevin Baird of Legacy Church in Charleston, S.C., questioned from his pulpit the integrity of a local Republican incumbent who called himself “pro-life” but didn’t lift a finger on that issue while in office.

In Georgia, Rev. Jeff Whitmire used his sermon last month to express his support for two Republican candidates for public office over their Democrat opponents.

These and other sermons by preachers are reminiscent of similar expressions voiced in America’s past by men who were unencumbered with trying to be politically correct in order to maintain their churches’ tax-exempt status. From Rev. Matthias Burnett in 1803:

Look well to the characters and qualifications of those you elect and raise to office and places of trust….

Let the wise counsel of Jethro [father-in-law of Moses] … be your guide: “Choose ye out from among you able men, such as fear God, men of truth and hating covetousness” and set them to rule over you.

The church must take right ground in regard to politics.… Politics are a part of a religion in such a country as this, and Christians must do their duty to the country as part of their duty to God.

The time has come that Christians must vote for honest men and take consistent ground in politics….

Christians have been exceedingly guilty in this matter….

God cannot sustain this free and blessed country which we love and pray for unless the Church will take right ground…. 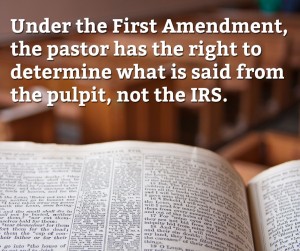 It seems sometimes as if the foundations of the nation are becoming rotten, and Christians seem to act as if they think God does not see what they do in politics. But I tell you He does see it, and He will bless or curse the nation according to the course [Christians] take.

Some have assumed that the IRS is biding its time, waiting for the public furor over its illegal activities to die down, or until after the election is over, or wanting to pick an especially egregious breach of the Johnson Amendment by some stiff-necked black-robed malcontent looking for a fight. After all, many of those preachers are not only violating the Johnson Amendment in public, they are making copies of their sermons and sending them to the IRS, daring it to instigate action against them!

The real reason for IRS recalcitrance, however, might come from unwillingness to engage in a battle it ultimately cannot win. IRS Commissioner John Koskinen said that his agency’s intentions following its acquiescence in a lawsuit brought by the Freedom From Religion Foundation (FFRF) — itself a 501(c)(3) tax exempt group — were greatly overstated. Word got out “that somehow we are doing something very different and [that] we are going to show up either more aggressively or more often in a different way than we have in the past…. That is not what that case was about at all.”

This waffle from the head of the IRS is surely disappointing to both the FFRF and the ADF. The first wants to clamp down on political speech by pastors, while the second is spoiling for a fight in support of it. The longer the IRS dithers, the greater the momentum grows behind support for the First Amendment rights of preachers to preach God’s word and say what needs to be said about venal politicians parading in robes of righteousness while supporting Satan’s plans for destruction of the Republic.

A graduate of Cornell University and a former investment advisor, Bob is a regular contributor to The New American magazine and blogs frequently at www.LightFromTheRight.com, primarily on economics and politics.