PATRIOTS THEN AND NOW

April 19, is Patriot’s Day. On this day in 1775, about 70 men stood armed on Lexington Green as over 800 British troops descended on the town in route to Concord for the purpose of seizing a cache of arms known to be stored there and arresting two outspoken proponents of American independence: John Hancock and Sam Adams. Seeing the Minutemen (as they came to be called) standing on the green with muskets in hand, British officers commanded the men to throw down their arms, which they refused to do. Almost simultaneous to the command to disarm, the British soldiers opened fire upon the colonists, killing eight men instantly. This became known as “the shot heard ’round the world,” as it was the event that ignited America’s Revolutionary War.

The British troops easily marched through Lexington but were met by hundreds of armed and determined patriots at the Concord Bridge. A fierce battle ensued, which resulted in a bruising British defeat and the retreat of the Crown’s troops to Boston. The Colonists were done talking; the brutal killings of the men at Lexington, along with the British attempt to confiscate the firearms of the people and to arrest Hancock and Adams, was the straw that broke the camel’s back. From that point onward, the issue would be decided on the battlefield.

Remember that the Colonists had patiently endured the harassment and haranguing of the British Crown for decades. Resentment and righteous indignation were deeply imbedded in the souls of those beleaguered “children of the Pilgrims.” And the killings at Lexington were not the first time innocent Americans were shot down by British troops. Some five years earlier, on March 5, 1770, a squad of British soldiers had opened fire on unarmed American civilians killing seven of them. The Boston Massacre (as it came to be called) was still very fresh in the minds of the Colonists as British troops advanced upon Lexington. And with the massacre of the men of Lexington, the last line in the sand had been crossed.

In my mind, it is no coincidence that a similar line in the sand took place here in the middle of April, 2014, in the Nevada desert at a place strikingly similar in name to a famous Revolutionary War battlefield: a place called Bunkerville.

“Judge Andrew Napolitano appeared on Fox News to denounce the federal government’s operation against Nevada cattle rancher Cliven Bundy, asserting that BLM agents should have been arrested for seizing his property and that the case represents a ‘line in the sand’ for Americans who have had enough of big government tyranny.

“Napolitano said the feds were forced to back down because they had suffered a public relations nightmare, pointing out that Bundy lost his case in a federal court but that the case should have been tried in a state court.

“‘The federal judiciary should not be deciding what land the federal government owns,’ said Napolitano, adding that the feds should have placed a lien against Bundy’s property to collect grazing fees and not conducted a raid backed up by armed agents to seize his private property.”

The report continued saying, “Napolitano also chastised the BLM’s ludicrous creation of a ‘First Amendment Area’ outside of which free speech was banned. Protesters completely ignored the zone and it was quickly torn down by BLM officials after being widely derided in the media.

“‘They established something utterly repellent in America, a First Amendment Zone…the square was three miles away from where these events were going–this is the federal government emasculating the First Amendment rights of the protesters,’ said the judge.

“Napolitano characterized the resistance shown by Bundy supporters as a clear example of how Americans feel, ‘enough is enough with the federal government, we’re drawing a line in the sand right here–and it drew people from all around the country who basically said “quit your heavy handed theft of property and act like you’re a normal litigant and not God almighty.”‘”

Hundreds of patriotic Americans (most of whom were well-armed) looked down the gun barrels of the BLM and fearlessly defied the orders to stand down and physically took back Mr. Bundy’s cattle that had been illegally confiscated by the Feds. Fortunately, BLM agents acted more wisely than did the Crown’s troops at Lexington in 1775. I shudder to think what would be happening right now if they had not.

There has not been a day in American history like that Saturday since–well–since April 19, 1775.

And make no mistake about it: this is what the Second Amendment has always been about: the ability of the citizenry to defend itself against oppressive, overreaching government. Had we no Second Amendment for the last 200-plus years, had the people’s right to keep and bear arms not been engrained in the very heart and soul of America for the last 200-plus years, Mr. Bundy’s land and cattle would be the property of the federal government, and Mr. Bundy and his family would either be in jail or six feet under right now. In fact, without the Second Amendment, the liberties enshrined in the Bill of Rights would have been thoroughly expunged from this country many decades ago. The only thing standing in between your right to freely do anything and the heel of the tyrant’s boot over your throat is a watchful, determined, and resolute armed citizenry–known to America’s founders as the citizen militia. That’s what British troops encountered at Lexington Green; and that’s what BLM agents encountered at Bunkerville.

Not only did hundreds of armed citizens show up in Bunkerville, so did dozens of local and State officials. There were county commissioners, assemblymen, and State legislators there from several western states, including Nevada. Had BLM agents opened fire on the people assembled in front of them, they, no doubt, would have killed several elected public servants. I don’t think the federal government really wants its agents to murder State and local officials.

And I must hasten to add that among the elected public officials on the front line of that confrontation–along with the hundreds of everyday citizens assembled there–were women. And make no mistake about it: these ladies were there of their own volition; no one asked them to be there. And practically everyone there–men and women–had some sort of camera or recording device. Again, I don’t think the federal government wants its agents on videotape slaughtering ladies and even children. Yes, I know that is exactly what they did at Waco. In fact, most of the citizens killed at Waco were elderly men, women, and children. But there were no cameras present; no cell phones; and no elected officials. The federal government was able to completely cut off the Branch Davidians from the outside world so there would be no recorded testimony as to what happened. At Bunkerville, the combined presence of hundreds of armed militia, hundreds of ladies, dozens of elected officials, and cameras galore helped convince BLM to be civil.

We have turned a page. The rules of engagement have forever changed. And I think the federal government knows it.

Does this mean it’s over? Not on your life. The militia will be on site in Nevada for the foreseeable future. And there are examples of the federal government’s overreach taking place all over America–especially in the western states. As Thomas Jefferson noted, “Eternal vigilance is the price of liberty.” Indeed.

I arrived in Bunkerville early Monday morning, the 14th. I participated in the press conference conducted by the Bundy family that afternoon. I met with the militia, several elected officials, citizens of Nevada, and the Bundy family. I was even honored to be invited to speak to the militia and their families and supporters at the militia command center. I conducted a prayer service for those folks and delivered a 20-minute Bible message to them. The local ABC affiliate also sent a reporter and cameraman with us; and they filmed the entire service.

There is absolutely no question that there are nefarious backroom deals involving Senator Harry Reid that were in play at the BLM siege against the Bundy ranch. The people of Nevada should demand the truth about these deals and after the truth is put in the sunlight, run Harry Reid out of the State on a rail. Harry Reid is symbolic of everything that is wrong in Washington, D.C.

I caution folks to not believe everything you read about the Nevada situation in the media or on the Internet. There is a lot of exaggeration and misinformation floating around. That is a major problem for those of us in the freedom movement. For example, there is no indication at this point that BLM is planning a violent assault against the ranch. As of the time that I left the ranch, BLM agents had totally withdrawn. If the federal government launched a violent assault against the Bundys, it would escalate resistance a thousand-fold. They don’t want that to happen.

But this war against property and water rights in the west is becoming increasingly onerous. We desperately need a determined and concerted effort to demand that State legislatures and local governments pass ordinances and legislation removing federal control of State lands. These lands do not belong to the federal government; they belong to the States and to the People. If you truly want to do something to help preserve our future liberties, convince your local and State legislators to pass legislation to remove control of State land from the federal government.

We also desperately need legislation disarming federal bureaucracies. Agents of the federal government are not soldiers; and the American people are not the enemy. Except for a very few and specifically enumerated crimes, the Constitution declares that law enforcement is the venue and responsibility of the States and of the People. Federal agents have proven–and continue to prove–that they are not anywhere near trustworthy enough to be given a badge and a gun. As private citizens, they deserve the right to keep and bear arms along with the rest of us. But as agents of the federal government, they have no right to usurp the law enforcement authority of State and local officials.

And speaking of State and local officials, the governor of the State of Nevada and the sheriff of Clark County, Nevada, should be absolutely 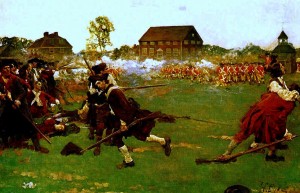 ashamed of themselves! What’s more: the people of Nevada should be ashamed of them–and vote them out of office, if not impeach them before their reelection–for their refusal to assist the citizens of their State during this time of crisis. All we need is for a governor and sheriff to interpose on behalf of the citizens of their State and county and all of this federal abuse of power would come to a screeching halt. Boy, do we need some constitutional governors and sheriffs!

We also need pastors to start taking a stand in the pulpits as did the pastors of Colonial America. As I told the people at Bunkerville, if the pastors of America were doing their jobs on Sunday, all of this would never be taking place. How long will the Christians of America tolerate it?