It’s not Barack Obama’s style to win a victory with any sort of humility, you understand. That’s not in his makeup. And there’s really little point in mentioning that he was “opposed” to gay marriage as recently as 2012 when he announced his big evolution on the issue, because everyone knows he wasn’t really opposed at all. He pretended to be until he sensed correctly that the politics of the country were changing and it was OK to admit he was for it – which he had been all along.

Anyway, if you’re a Christian who is grieved by this ruling and you’d like to think the president would greet the ruling with some level of dignity that would reflect a level of respect for differing views on the issue . . . sorry: 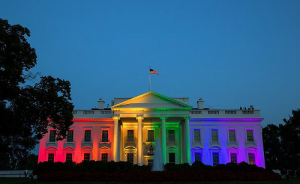 And yeah, they really did light up the White House in the colors of the gay rainbow flag, which is something they had to be planning for days in anticipation of the ruling. The logistics of it don’t allow for the possibility that it was a spontaneous reaction.

Do with it what you will, I guess. Obama knows full well that a lot of Americans are heartbroken to see that their government has now established law in direct contradiction to God’s Word. With his decision to spike the ball here, Obama not only comes down decisively in opposition to the values of those Americans (which of course we all knew), he also makes it clear that he’s more than happy to rub their noses in it.

Oh, and how rich is it that he gave lip service to people whose opposition is based on “sincere beliefs” and the need to be “mindful” of that while putting on this arrogant a display?

Serious question here: I know there are a lot of Christians – real ones, who love the Lord and are saved by the blood of Jesus Christ – who voted for Obama twice and still support him. I really want to know . . . how can you still do that? I am honestly flummoxed.