BOSTON, MA. – A coalition of pro-life organizations, activists, and journalists issued a public statement recently calling upon Cardinal Sean O’Malley, the Archbishop of Boston, and the other Catholic bishops of Massachusetts, to stop their betrayals of the pro-life movement.

In its 2004 document “Catholics in Political Life,” the U.S. Conference of Catholic Bishops specifically prohibited Catholic institutions from giving awards, honors or platforms to political figures who support legal abortion. The coalition cited nineteen violations of this in the last three years involving Catholic prelates in the Bay State.

Among the scandals decried by the statement’s signatories was Cardinal O’Malley’s attendance at the 2017 Profiles in Courage Award ceremony at the Kennedy Library honoring former President Barack Obama, whose administration was sued by the Little Sisters of the Poor over the Obamacare contraceptive mandate. 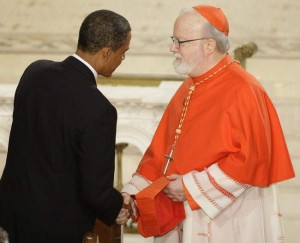 Another incident criticized was the 2014 presentation by the Missionary Society of Saint James the Apostle – whose president is Cardinal O’Malley – of the Cardinal Cushing Award to Boston Mayor Marty Walsh, a longtime proponent of legal abortion. Walsh, the recipient of the 2016 Men of Choice Award from NARAL Pro-Choice Massachusetts, went on to defend the public funding of Planned Parenthood, name a square in the city’s South End after abortionist Kenneth Edelin, and call for Boston to become a sanctuary city for abortions, should Roe v. Wade be overturned.

Along with asking for full episcopal compliance with “Catholics in Political Life,” the coalition is also urging the bishops to reverse their recently imposed ban on signature gathering on church property, the timing of which will adversely impact an initiative petition drive seeking to end tax funded abortions in the Commonwealth.

The coalition characterized the bishops’ behavior as a series of “repeated, ongoing and worsening scandals and betrayals, which demoralize faithful Catholics, marginalize the pro-life community, and send a message of confusion and contradiction to secular society.”

“All we are asking of our prelates is that they uphold their own professed principles and abide by their own stated policies. The disconnect in the Catholic hierarchy between rhetoric and reality on the issue of abortion must come to an end.

“The bishops expose themselves to the reproach of hypocrisy when they urge Catholics to support the right to life, but then give awards and platforms to public officials who work to keep abortion legal, unrestricted and publicly funded.

“No rational person can reasonably be expected to take seriously Catholic opposition to abortion when Catholic bishops and cardinals honor and extol, at public events, even in their own institutions, political figures who are opponents of the right to life, and allies of Planned Parenthood. The bishops need to stop these betrayals.”