(WNS)–Jeanne Mancini, president of March for Life, didn’t think things could get worse in 2016.

First came the landmark 5-3 decision in Whole Women’s Health v. Hellerstedt, where the U.S. Supreme Court struck down safety measures adopted by Texas state lawmakers to regulate abortion centers. The decision in late June represented a major blow to pro-lifers who hoped a different outcome would have ramped up safety standards nationwide and reduced the number of abortions.

Then the next day, the high court rejected an appeal from a Washington state pharmacist who did not want to betray his conscience and provide abortifacient drugs. Justice Samuel Alito wrote in his dissent that those who value religious freedom “have cause for great concern.”

Back-to-back court defeats combined with extreme pro-abortion candidate Hillary Clinton leading in most presidential polls at the time had pro-lifers reeling. “In a two-day period we thought we were losing our culture,” Mancini said. 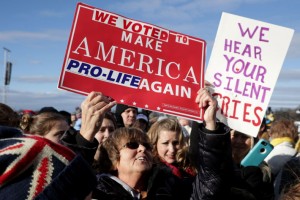 But six months later, as March for Life staff members and volunteers finalize plans for the world’s largest annual peaceful protest for the unborn in January, there’s a renewed sense of optimism in the pro-life movement for 2017 and beyond.

State legislatures across the country continue to make incremental progress on protecting children in the womb. Nebraska became the first state to pass a ban on abortions after 20 weeks in 2010. Since then more than a dozen states have enacted similar limits and numerous other protections.

An ambitious agenda that seemed impossible earlier this year without pro-life officials in key government positions, but Election Day results have sparked a fresh outlook for pro-life organizations.

“With Hillary, we were looking at a pro-abortion Supreme Court for the next 30, 40 years; we wouldn’t get anything passed,” said Joe Scheidler, founder of the Pro-Life Action League and a pioneer in pro-life activism. “But [Donald Trump’s] strange election has electrified the movement.”

Scheidler was not a Trump fan during the campaign, telling me he thought the president-elect was a playboy and that many of his ideas, such as building a wall at the U.S. southern border, were “ridiculous.”

After Trump clinched the Republican nomination, his selection of Indiana Gov. Mike Pence as his running mate and Kellyanne Conway as his campaign manager helped quell Scheidler’s skepticism. But he never believed Trump could actually win.

“We were ready to be where the Democrats are now: gloomy, sad, disturbed,” Scheidler said. “But Trump sneaking through the way he did, there’s a really strange optimism.”

Other social conservatives share Scheidler’s newfound hope. Family Research Council president Tony Perkins even went as far as emailing his donors that “God gave America a reprieve in 2016 from judgment.”

But Abby Johnson, CEO of And Then There Were None (ATTWN), a non-profit organization that helps abortion workers leave the industry, told me Election Day didn’t change anything for her.

“Our goal has never been to make abortion illegal; our goal is to make it unthinkable,” she said, adding that achieving that cultural shift stems from changing hearts and minds, not playing politics.

ATTWN helped more than 100 abortion center workers vacate the industry in 2016 alone—the most since Johnson started the organization in 2012.  “We tell people, ‘No one grows up dreaming of working in an abortion clinic,’” Johnson said. “I think that message really resonates with people.”

Johnson, Scheidler, and Mancini all say there’s now a negative stigma on the abortion industry and public opinion is trending in a pro-life direction. A 2016 survey showed a majority of Americans support fewer abortions. And even among persons who identify as “pro-choice,” 51 percent do not support abortions after the first trimester.

Pro-abortion supporters are taking notice, including politicians. This month a group of 34 pro-abortion U.S. senators, led by Sen. Patty Murray, D-Wash., wrote a letter to Trump asking him to protect Planned Parenthood’s funding.

“The economic security of women and their families is directly tied to a woman’s access to reproductive health care, including birth control and counseling,” the senators wrote. “We urge you to stand with women and against Congressional Republicans.”

Trump has not responded publicly to the letter, which pointed out that during the campaign he said, “Planned Parenthood has done very good work for millions of women.” But the president-elect also has said, “We’re not going to fund [it] as long as you have … abortion going on at Planned Parenthood.”

The 44th annual March for Life will take place in Washington, D.C., on Jan. 27—one week after Trump’s inauguration.