Producer of VAXXED Speaks Out: “This is Bigger than Watergate” 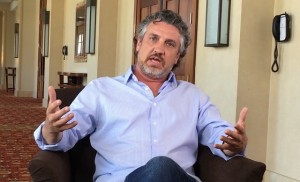 Del Bigtree, producer of the controversial film “VAXXED,” recently appeared on the National Safe Child Show with Tammi Stefano in Los Angeles. Before taking on this film project together with Dr. Andrew Wakefield on the MMR vaccine fraud, Mr. Bigtree was the producer of the popular daytime medical show “The Doctors.”

Mr. Bigtree states that when he learned about the top scientist whistleblower at the Centers for Disease Control (CDC), that he knew this was the biggest story of his life, and that this was “bigger than Watergate.” Since the 2004 study that supposedly proved there was no link between the MMR vaccine and autism was published by the CDC, more than one million children have been diagnosed with autism, and now one of the study’s authors at the CDC has revealed that data was concealed that actually showed there was indeed a link between the vaccine and autism in some children.

Mr. Bigtree makes it clear that this is not an anti-vaccine movie, but a movie about government corruption at the CDC. Many formerly pro-vaccine doctors are now speaking out.

The VAXXED film crew recently interviewed Dr. Douglas Mackenzie from California. Dr. Mackenzie is now a plastic surgeon, but he formerly worked in the immunology division of the military overseeing vaccines. He was originally pro-vaccine because he had no idea that there were any physicians who questioned vaccines, not because he actually researched the matter.

As he began to prepare to become a father, he decided to research vaccines further. He states in the interview that he had “no ax to grind” and “no skin in the game,” and was therefore just looking for the truth.

He read books by Dr. Andrew Wakefield and Dr. Suzanne Humphries that questioned vaccines, as well as books that promoted vaccines, particularly by Dr. Paul Offit.

Dr. Mackenzie states: “Any physician who will do their own research, and look at the science, both sides of this, and look where the biases are, and look at the bad epidemiology that is out there, will have a change of heart. That’s assuming they don’t have a lot at stake.”

The VAXXED film crew recently interviewed Dr. Franz from Orlando. Dr. Franz starts out the interview by stating that her story was very similar to everyone else the VAXXED film crew was interviewing, which is that in the beginning she was a “hard-core” believer in vaccines. However, when she first started her practice, the most vaccines anyone ever received in one visit was “two at a time.”

Even back then when the vaccine schedule had far fewer vaccines, Dr. Franz testifies that she saw “problems” early on. Kids on monitors, for example, had “increased alarms” causing her to deal with fever control and other symptoms.

In the late 1980s when the vaccines increased, they wanted her to give more vaccines at one visit, like four or five, and she stated that she “had a problem with that.” She decided that in her practice, they would continue to only give two at a time.

But even at this reduced schedule, Dr. Franz stated that she began to see “truly vaccine-injured kids.” She began to see a lot of autistic children, and the parents all said the same thing: They said, “My child was fine until they got this shot, and then within a week we lost them.” Not dead, but they quit having eye contact, they lost language… And I heard that so often, that I began doing research.

Like many other doctors who routinely believed in vaccines without ever having researched them for themselves, Dr. Franz was troubled by what she found. She found that many of the ingredients in vaccines were toxic.

I can tell you today, having been in clinical practice for over 30 years, that the children I see today are sicker than they were when I was a resident. According to Dr. Franz, by the time a child is 5 years old today, they will have received 117 vaccines (antigens).