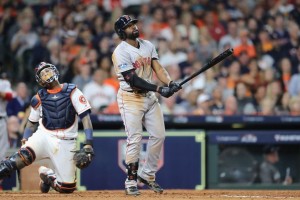 The Boston Red Sox are the American League champions. They defeated the defending champion Houston Astros, 4-1, to move on to the World Series.

“I’m speechless. It’s amazing,” Bradley said after Game 5. “I have amazing teammates, amazing staff, everybody’s just such a blessing. This is what we set out to do when we come to spring training. We battled, we’re battle tested playing against great teams. This is definitely a special moment.”

Bradley’s entire career has been spent with the Red Sox organization after he was selected in the first round of the 2011 MLB Amateur Draft. He made his debut in 2013 and was part of a Red Sox squad that went on to win the World Series that year. In 2016, Bradley enjoyed his best season, hitting 26 home runs, driving in 87 runs and being named to the American League All-Star team. And this year, he was a part of a Boston team that won a team-record 108 games.

The journey to winning the ALCS MVP is one that Bradley says starts with his faith in God. “It’s not just about the game. It’s about living what you’re preaching,” Bradley said in 2013. “You’re going to make mistakes, but as long as God is your main focus, more often than not you’re going to make the right decision.”

On his Twitter profile, Bradley defines himself with the acronym “F.I.G.H.T. (Forever I Give Him Thanks).” And by living out his faith, he says he can focus on the things that matter most: his faith and his family.

“I’m able to separate the game from my family life and home life just because at the end of the day, it’s just a game for me. I enjoy playing it but it’s not the end-all, be-all for me,” he told MassLive.com in 2015. “Just being a great man and living for God. That’s where I keep my faith. Baseball is not going to make or break me.”

Now on to the World Series for Bradley and the Red Sox, as they look to win their first world championship since 2013.