Rep. Devin Nunes (R-CA), the chairman of the United States House Permanent Select Committee on Intelligence, went on with Sean Hannity to discuss the surveillance by the Obama administration on the Trump Transition Team. Nunes said the crime of releasing General Flynn’s conversations to the Russian Ambassador is up to five years in prison. 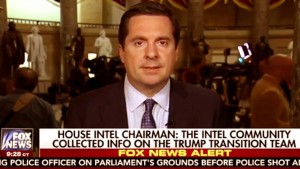 Sean Hannity: Not only an unmasking took place but also an intelligence leak. And as I understand it never happens in a case where signature intelligence such as this is in fact obtained. Is that correct?

Rep. Devin Nunes: Yeah, I’ve never heard of that happening before and as I’ve said many times the only crime that has been committed here is that one and it’s quite clear that it was a crime…

Rep. Devin Nunes: That’s correct and it appears that that happened.