Revival Breaks Out in Land Once Hostile to Christianity

By Jeremy Reynalds
NORTHERN AFRICA (ANS) — A Christian revival is touching the northernmost reaches of Africa. In a region once hostile to the gospel, tens of thousands of Muslims are now following Jesus. Muslims across Northern Africa are converting to faith in Jesus Christ in record numbers.

Speaking in a story by George Thomas for CBN News, Regent University graduate and filmmaker Tino Qahosh said, “What God is doing in North Africa, all the way from actually Mauritania to Libya is unprecedented in the history of missions.”

Qahoush has spent years traveling the region to document the transformation.

He said, “I have the privilege of recording testimonies and listening to firsthand stories of men and women, of all ages where they can be sitting in a room and see the appearance and the presence of God appear to them in reality, like a vision, some of them gave me stories of how they carry on a conversation, it’s not just a light that appears.”

He added that he sometimes feels jealous. “How come Jesus is visiting the Muslim world at this time and age and we don’t hear that happening in the traditional Christian community?”

Thomas said his interviews confirm what experts say is a profound move of God in the predominantly Muslim nations of Mauritania, Western Sahara, Morocco, Algeria, Libya and Tunisia.

From the shores of Casablanca in Morocco to Tripoli, Libya, experts say the growth of Christianity, especially in the last 20 years, has been unprecedented. And now that growth is also evident in the North African nation of Algeria.

Pastor Salah leads one of the largest churches in Algeria. Some 1,200 believers attend the church, and 99 percent of the population is Muslim.

“In fact we never thought the Algerian church would grow so big,” Thomas reported Salah said. He pointed out that every new Christian in his church came from a Muslim background. Since the church opened, they have baptized an average of between 150 to160 believers per year.

Zino, a former Muslim, was invited to attend Pastor Salah’s church by a friend.  What he observed transformed him. “I saw Algerians worshiping God with all their hearts and it touched me.”

Others, like Farhat who is also a former Muslim, speak of miraculous encounters. He says he was illiterate and couldn’t read the Bible when he accepted the Lord, but then God made a change.  “Since then I’ve read the Bible and understood the Word of God. This is just an example of what God has done in my life and this is the case of many people here in Algeria.”

Thomas said even though Algeria is overwhelmingly Muslim the government has given protestant churches the freedom to register their congregations.

“It is the first Muslim Arab government who recognizes officially churches other than Islam,” said Youssef Qurahmane, a leading Algerian Pastor. He added that the government harass and intimidate Christians from time to time, but the level of persecution is nothing like it was 20 years ago.

In fact, Qurahmane is seeing God open unprecedented doors. Thomas reported he said, “God has given to us many opportunities to witness at the police stations, at the courts, and in fact one time I went to the police station and they gave me 45 minutes to speak about Jesus! Just imagine yourself, they are all Muslims sitting and telling me, ‘Tell us about Jesus!'”

But Algeria and the countries of North Africa weren’t always open to the gospel. A veteran missionary in the region says things were very different some years ago. We’ll call him “Peter” for security reasons.  Peter uses the Bible to describe the landscape.

Thomas reported he said, “You know there’s that parable, the sower went out to sow and the seeds fell on stony ground, this is North Africa, in those days was quiet resistant and stony. The religion and the culture were unsympathetic to anything that was foreign and Christianity was considered to be the religion of the Europeans.”

Peter believes the arrival of satellite TV and the Internet have dramatically changed people’s perception of Christianity. “Today in North Africa on TV you can hear native Arab Christians talking about their faith, who are mature Christians, answering questions, involved in debates, you can hear different points of view, the Christian point of view in your own living room or in the privacy of your own bedroom.”

Emboldened by God’s power, Thomas says Algerian Christians are now on a mission to take the gospel to the four corners of the globe. “God has put in our heart to be able to send 1,000 missionaries by the year 2025. I really believe that maybe one day America will end up with some Muslim convert missionaries coming to reach out to the Muslims there and in other parts as well,” says Pastor Qurahmane. 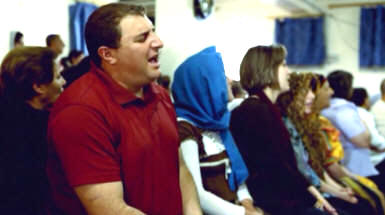 Caption: In a region once hostile to the gospel, tens of thousands of Muslims are now following Jesus.
(CBN)